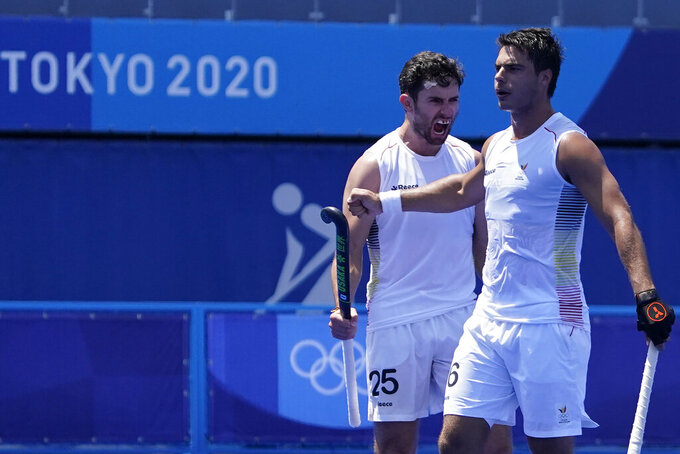 TOKYO (AP) — Not even Alexander Hendrickx knew he could score like that.

The Belgium defender knocked in three goals during a five-minute stretch late in the third quarter Saturday to help his team beat the Netherlands 3-1 in the men’s Olympic field hockey tournament.

“Maybe in the youths, but definitely not in the Belgian national team,” Hendrickx said of his goal-scoring outburst. “It’s definitely a first time for me.”

The Netherlands led 1-0 before Hendrickx scored on a penalty corner, a penalty stroke and another penalty corner. He credited his teammates with creating the opportunities.

“I’m now the guy that’s on the score sheet, but another day, it’s someone else,” he said. “It’s just a team performance. And they get the corners for me. I finish it. I repay them. And I’m really happy with the overall performance.”

It was a matchup of powerhouses on the opening day of men’s field hockey. Belgium, which beat the Netherlands for the world title in 2018, is No. 2 in the FIH world rankings while the Netherlands is No. 3.

Belgium squandered a lead before losing to the Netherlands in the EuroHockey semifinals last month, so holding on for the victory on Saturday was important.

“I think now we manage it better,” Hendrickx said. “When we came 3-1 up, we just kept the ball, kept on playing. And I think that every time we learn some lessons.”

“This says nothing about the tournament yet,” Caldas said. “It’s all about how we start tomorrow.”

“It was by far our poorest quarter of them all,” he said. “We gave them the ball for free and they’re a pretty good side. When they have the ball for too long — they grabbed momentum and it’s tough.”

The Netherlands got a yellow card in the fourth quarter for having 12 players on the field, which forced team captain Billy Bakker to sit out for five minutes.

“It’s a little mistake from our team that someone made a sub, and then the captain unfortunately needs to take (time) off,” Bakker said. “That was me for today and that’s something that’s not very handy.”

Host Japan led top-ranked Australia 3-2 at halftime, but the Kookaburras rallied to win 5-3.

“They’re a good side,” Australia coach Colin Batch said. “They’re very fast and have a good counter-attack. We didn’t take them lightly at all but we needed to be smarter with what we did with the ball.”

Japan felt like it missed an opportunity, and now the hosts must regroup for Sunday’s match against Argentina.

“We were close to overtaking the Australian team in the heat of the match, but in the end we lost, so there is a bit of regret,” said Kenta Tanaka, who scored two goals for Japan. “But we have to take this momentum to the next match.”

Earlier, Argentina and Spain tied at 1-1. Argentina, the defending Olympic champion, took the lead in the second quarter on a goal by Agustin Mazzilli. Pau Quemada scored on a penalty corner in the middle of the fourth quarter to tie the score for Spain.

In the other women’s match, Ireland topped South Africa 2-0 in its first ever Olympic match. Roisin Upton scored Ireland’s first Olympic goal in the ninth minute, and Sarah Torrans added another in the third quarter.