The Latest: Fleetwood moves on after breakup of 'Moliwood' 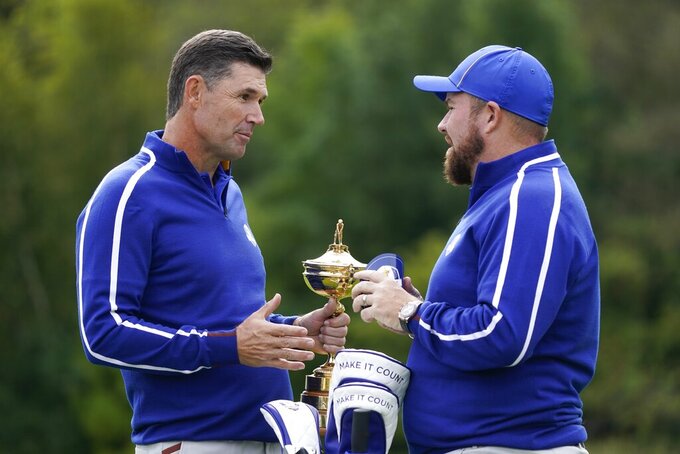 SHEBOYGAN, Wis. (AP) — The Latest on the Ryder Cup, the golf showdown between the United States and Europe (all times CDT):

Batman without Robin, Frick without Frack, peanut butter without jelly.

England’s Tommy Fleetwood, half of the most celebrated pairing at the last Ryder Cup — dubbed “Moliwood” — will have to forge on with a new partner or two at Whistling Straits. His sidekick from that 2018 event, Italian Francesco Molinari, a British Open champion with three previous appearances in the Cup, failed to qualify this time around or secure a captain’s pick.

“He would have loved to be here,” Fleetwood said Wednesday of Molinari, with whom he combined to steal the headlines and produce a perfect 4-0 record in team play three years ago outside Paris.

The partnership grew out of a friendship between the two Europeans and they spun their genuine affection for one another into comic gold. In a video produced not long after Europe won at LeGolf National, the two went so far as to pose lying in bed together — with the Ryder Cup perched on the pillows between them.

For all that, Fleetwood signaled that it’s time for Europe’s golf fans to move on.

“We’re obviously very, very close,” Fleetwood said, but quickly added: “I think people may be overly focused on it. It’s not around this week, but also we have an unbelievable team, and I can’t wait to partner up with whoever that’s going to be.”

Xander Schauffele doesn't have a lot of favorite memories of the Ryder Cup, mainly because he never watched a lot of golf on television. Schauffele says he usually watched golf on a Sunday afternoon to fall asleep.

He says he would watch the San Diego Chargers. Then, his father would switch over to golf and Schauffele would doze off. He woke up in time for Sunday Night Football.

Schauffele says he's seen the highlights just like any other young golf fan. But his strongest memories were of Tiger Woods in a red shirt on Sunday. He says Woods wasn't always wearing red at the Ryder Cup unless that was the Sunday outfit for the U.S. team.

Schauffele won the gold medal at the Olympics this year. He says his priority for watching golf on TV were the majors, The Players Championship, the Ryder Cup and then later the Presidents Cup. “Those were kind of the order of how my dreams stacked up,” he said.

What started as a pledge now appears to be a tradition in the Ryder Cup: Padraig Harrington says he'll be getting a tattoo if Europe wins.

Thomas Bjorn followed through on his promise in France three years ago by getting a tattoo of the Ryder Cup on his buttocks.

Harrington says he's happy that it's all his team asked for because he would have been willing to give a lot more for another victory. Turns out he really didn't even ask. The captain says it's become an unwritten rule that has come up in conversation.

The Irishman doesn't have any tattoos. He says he would look forward to that experience. But he wouldn't quite reveal where he would have it put on his body.

What better way for the Europeans to lure fans to their side at the Ryder Cup than by wearing Green Bay Packers colors and donning Cheesehead hats while they're in Wisconsin?

Clad in white pullovers with green and yellow striping down the sides, the European players did all they could to endear themselves to the crowd on the first tee box Wednesday. After posing for a photo op, the players took off the foam headwear and threw it into the stands, before heading out for practice rounds at brisk-and-breezy Whistling Straits.

America's home-course advantage figures to be accentuated this year because of COVID 19-related travel restrictions that will make it difficult for European fans to make it to the course, located in the heart of America's dairy country.

European captain Padraig Harrington said team managers had suggested a green motif for some of the uniforms as a way of honoring his Irish homeland. Harrington said he wasn't so concerned with that, but he suggested adding some yellow to the green as a tribute of sorts to the local NFL team.

Certainly couldn't hurt to try to get some Wisconsin folks on his team's side, he figured.

Pairings for the opening round will be released Thursday evening, with play starting with alternate-shot matches Friday morning. Europe holds the cup and has won nine of the last 12 meetings.