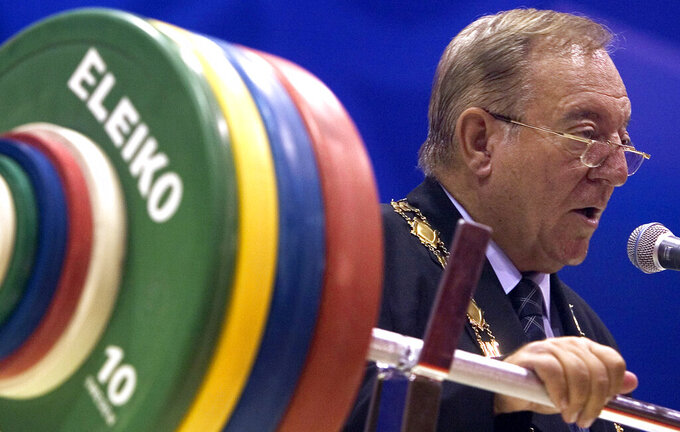 GENEVA (AP) — The former Olympic official who ran the sport of weightlifting for more than 40 years was banned for life on Thursday for covering up doping cases.

Tamás Aján of Hungary was found guilty of charges relating to tampering, fraudulent conduct and complicity in covering-up years of doping cases, the Court of Arbitration for Sport said.

The case came after allegations broadcast by German network ARD in January 2020 were verified by anti-doping investigator Richard McLaren.

McLaren was appointed by the International Weightlifting Federation when Aján was forced out of office after 20 years as president. He was general secretary for the previous 24 years.

Fallout from the case and the IWF's response to it has put weightlifting's Olympic status at risk. The International Olympic Committee has left weightlifting off the initial list of sports for the 2028 Los Angeles Olympics.

As a trusted sports leader, Aján was made an IOC member for 10 years until 2010 and helped to choose Olympics host cities. He also represented Olympic sports at the World Anti-Doping Agency.

The CAS statement said the case against Aján involved “complicity in anti-doping rule violations involving multiple weightlifting athletes over a period of many years since 2012.”

During that period, Aján sat on the WADA foundation board and was an honorary member of the IOC. He resigned from the IOC within weeks of the allegations being aired.

A life ban for complicity was also imposed on Romanian weightlifting official Nicu Vlad, a former vice president of the IWF Anti-Doping Commission.

CAS did not specify the allegations Thursday, but said it would publish the detailed verdict “in due course.”

In his June 2020 report, McLaren said his team found “systematic governance failures and corruption at the highest level of the IWF.”

McLaren said at least 40 positive doping tests were “hidden” in IWF records, that athletes whose cases were covered up went on to win medals at major championships, and that Aján received fines in cash from member federations. Millions of dollars was unaccounted for by the IWF, the investigation concluded.

Weightlifting’s historic doping issues were also confirmed in an IOC program of reanalysis of samples from the 2008 Beijing Games and 2012 London Games using a new test to detect steroids. Weightlifting had more than 20 doping cases from each Olympics.

The life bans were announced 10 days before the IWF holds elections, including for a president to replace Aján more than two years after he was ousted.

Aján’s son-in-law, Attila Adamfi, was one of 16 candidates for general secretary on a list published by the IWF last month. Adamfi was the IWF’s director general at the end of Aján’s presidency.