A muted Lunar New Year, inside and outside Olympic bubble 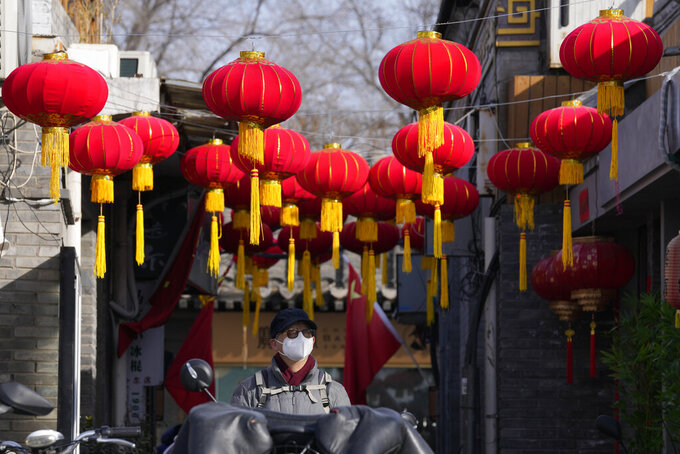 A resident wearing a face mask walks under red lanterns setup for the Lunar New Year holidays in Beijing, China, Monday, Feb. 7, 2022. As China gets back to business after a muted Chinese New Year holiday that coincided with the start of the pandemic-restricted Beijing Olympic Winter Games, the feeling inside and out of the bubble in this auspicious Year of the Tiger is that festivities for the most sacred and important holiday for the country were limited and underwhelming. (AP Photo/Ng Han Guan)

BEIJING (AP) — China's capital city returned to work Monday after a weeklong Lunar New Year holiday that was muted by the pandemic — especially for the thousands of people inside the Winter Olympics bubble.

For volunteers and competitors at the Games, there’s no hong bao – red envelopes – with gifts of cash, no lucky tang yuan rice cakes with sesame filling, no dramatically-choreographed lion dance.

“I really wish that we could gather outside and watch some fireworks or something but due to the pandemic, we can’t really gather and do that stuff unfortunately,” said Vincent Zhou, a Chinese-American figure skater with deep ties to Beijing.

Across China, the pandemic has meant a subdued Lunar New Year for the third year in a row. The government discouraged residents of the capital from traveling home to visit family to limit the spread of the virus. Those who did needed two negative virus tests before heading back to Beijing and a third test within 72 hours of returning.

Jing Kefei, a 28-year-old webpage designer, said he had just taken the third test before heading back to work. The Beijing subway was crowded again and the roads congested with commuters.

“It’s the same as normal working days, except that we were ordered to take the nucleic acid test,” he said.

Also known as the Spring Festival, the new year's holiday that fell on February 1 this year is the most important in China. Locally, it is faithfully celebrated with a singular focus of spending time with family for a week, though the celebration actually lasts most of the month, including the traditional Lantern Festival on February 15.

Chinese New Year is framed around one of the twelve signs of the Chinese zodiac. This year is the Year of the Tiger, an especially lucky animal in Chinese culture.

“My mom is the Year of the Tiger, so it’s very cool to just experience Chinese New Year here,” said Madison Chock, a Chinese-Hawaiian figure skater on the U.S. team.

The grandest display of the Chinese New Year revelry happened at the Opening Ceremony on Friday, when fireworks dotted the sky above the Bird’s Nest stadium, small cheerful children wearing Tiger hats did musical numbers, and other locals danced for hours to celebratory Chinese pop music as thousands of Olympic athletes took their turn in the parade.

International Olympic Committee President Thomas Bach noted the ceremony’s theme in his address at the Opening Ceremony, typically the most watched event of the Olympics.

“May this encourage you to go faster, to aim higher, to become stronger – together. In this way you will inspire the world in this Olympic Year with the same ambition, courage and strength like the Year of the Tiger,” Bach said in a message to the athletes.

It's clear the pandemic has complicated what grand celebrations may have been.

Xiang (Robert) Li, director of Temple University’s U.S.-Asia Center for Tourism and Hospitality Research, said the COVID-19 restrictions have hampered what could have been an extraordinary cultural tourism opportunity for overseas visitors here for the Olympics.

“Having the Winter Olympics to coincide with this actually gives China something to promote to help understand its culture. Unfortunately, the pandemic doesn’t help and the closed loop doesn’t help,” Li said. “Traveling during the pandemic, everything is against a very different backdrop.”

The Lunar New Year usually marks China’s busiest travel season. This year, China’s Ministry of Transport expects 1.2 billion trips to be made, a 35% increase from last year but lower than the 3 billion trips taken before the pandemic in 2019.

Wearing a red scarf, 49-year-old Chai Xiaoping arrived in Beijing on Sunday morning from the nearby port city of Tianjin after an anticlimactic holiday.

“In the past, my home was more lively and more festive with the family gathering for a reunion. But this year ... we were separated into several clusters,” said Chai, “The pandemic messed it all up.”

Even without the pandemic, the festival has become less boisterous over recent years amid fireworks bans, a campaign against food waste and concerns among Communist Party members that conspicuous consumption could draw the attention of anti-corruption commissioners. In recent years, Chinese people had increasingly taken advantage of the holiday to travel abroad, although quarantine restrictions have since led many to stay home.

A China visit for outsiders during Chinese New Year – a holiday that revolves around family – Li likened it to a foreigner visiting Thanksgiving in America with no family home to visit for the turkey dinner.

For Zhou, the figure skater, the fact that Beijing is like a second hometown to him with his grandparents and much of his extended family just down the road, it's a missed opportunity to celebrate with them.

“The volunteers were very festive. They all said ‘Happy New Year’ – or ‘xīnnián kuài lè’ – to all of us,” Zhou said. “They had brought in hotpot and Beijing Kǎoyā (Peking duck), so I had some of that, and I mean, the food’s been pretty good.”