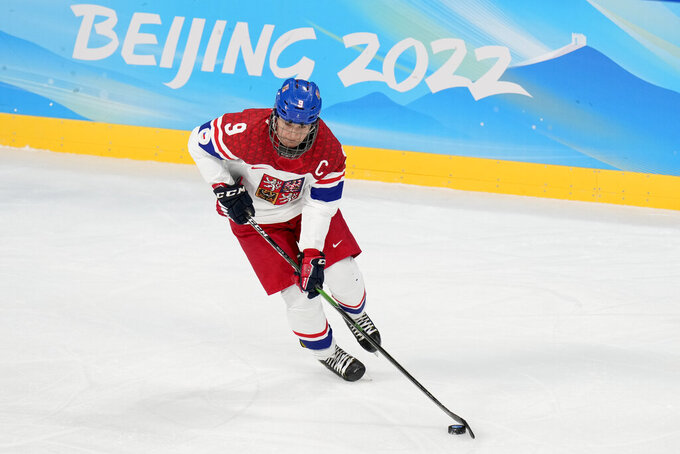 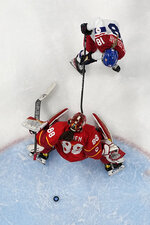 BEIJING (AP) — Alena Mills was 14 and dreaming of a career with the Colorado Avalanche, her favorite team. It didn't seem unreasonable for the promising hockey player from the Czech Republic. At that point, she didn't know any better.

“I always wanted to play in the NHL, like everybody, like all my guy friends. I didn’t know I couldn’t,” Mills said, bursting into a big laugh.

That idea was eventually squashed, but Mills' love for hockey still brought her to North America — first to a prep school in Pennsylvania, then to a college campus at Brown.

Little did she know, she was blazing a new path for puck-handlers from Prague.

The 32-year-old Mills is now captain of a Czech Republich women's hockey team that's become relevant on the international stage thanks to a growing number of players who followed her into the American collegiate ranks.

The payoff was apparent Thursday, when a Czech team featuring 14 of 23 players with NCAA experience made its Olympic debut with a 3-1 win over host China at the Beijing Winter Games.

Two of the Czech’s three goals came from players with past college experience — Michaela Pejzlova (Potsdam) and Denisa Krizova (Northeastern). The Czechs played with an up-tempo, puck-possession style that coach Tomas Pacina was able to introduce because of the players’ familiarity with similar systems in the NCAA.

“The basic skills, the smarts, the hockey understanding they have learned at home but also at the next level where you actually have to work on yourself and have to be better,” he added. “I think we’re very grateful that they were able to go and be at the universities.”

The Czechs outshot China 36-14 in a game they never trailed. Tereza Radova opened the scoring midway through the first period by redirecting Aneta Tejralova’s pass into the slot. Krizova scored by capping a set breakout, which caught China’s defense flat-footed. And Peljzlova sealed the win with a breakaway goal after being sent in alone by a perfect pass from Pavlina Horalkova.

China coach Brian Idalski knew exactly what his team was up against. He previously coached against many of the Czech players during his time at North Dakota.

“You just have to love the job Tomas has done with them,” Isalski said. “I mean, it’s fun to watch just the way they possess the puck and try to make plays, and play fast up and down the ice.”

The Czech Republic has enjoyed plenty of hockey success in the men’s game, producing stars like Jaromir Jagr, Patrik Elias and Dominik Hasek.

Meanwhile, the women’s teams have been essentially an afterthought in a sport dominated by the U.S. and Canada.

The Czechs only debuted at the women's world championships in 2013. After being relegated again for two years, the team has made four consecutive appearances at worlds, including a sixth-place finish in 2019.

“We’re not here satisfied winning one game or just getting into the tournament. We want to make it as far as possible,” said Noemi Neubauerova, a senior at Colgate. “I’ve grown as a player being in the States, so I definitely recommend it anyone in Czech who’s trying to improve in hockey.”

A first-time Olympian, she's already been given one of the Games' greatest honors: she'll carry the Czech flag at Friday's opening ceremony.

“It’s unbelievable, honestly, that I can do that. I haven’t absorbed that information yet,” Mills said.

With her knack for opening doors, she might not be the last women's hockey player to carry that flag.

“We’ve waited for it for a long time," Mills said. “I’m really enjoying being part of this process because I hope this is the start of the beginning of a new era for Czech women’s hockey.”