In Olympic first, men, women swim together in wild medley 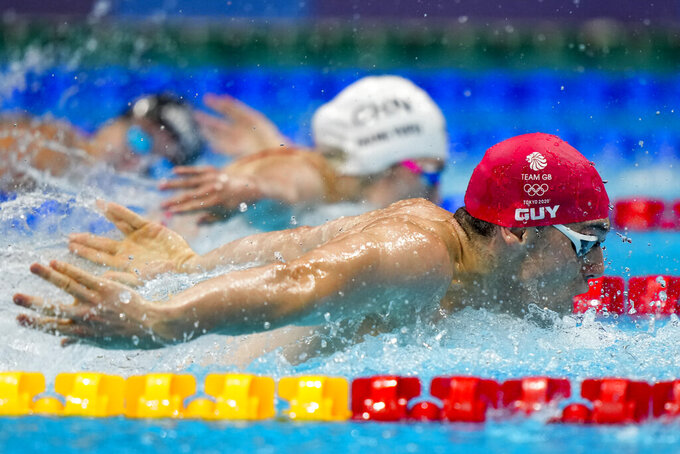 TOKYO (AP) — One swimmer’s goggles slipped off. Another worried about who was chasing her down. And strangest of all, the world’s dominant male swimmer dived in with no chance.

The Olympic debut of the 4x100-meter mixed medley relay lived up to its promise of utter chaos and unpredictability.

In the end, Britain emerged with a gold medal and a world record of 3 minutes, 37.58 seconds on Saturday. China claimed silver and Australia took bronze.

The event features two men and two women from each team who can swim in any order.

Swimming his third event of the day, Caeleb Dressel anchored the U.S. team as the only man to swim the freestyle leg. Most teams used women on that leg, because the difference in time between women and men is generally less on that stroke than the other three.

The Americans decided not to use Abbey Weitzeil or Simone Manuel, who had competed in the 50 free semifinals right before the relay. If they had, a male swimmer could have taken, say, the breaststroke leg, where there’s a larger gap between the fastest men’s and women’s times — roughly 7 1/2 seconds for the gold medalists in Tokyo.

Ryan Murphy led off for the Americans and had them tied for first with Italy after his backstroke leg.

Lydia Jacoby dived in next for the breaststroke and her goggles immediately slipped down to her mouth.

“I was definitely panicking,” she said. “My turn was where it was most rough because I couldn’t see the wall.”

The 17-year-old from Alaska was wearing just a single cap. Most swimmers wear two caps to help hold their goggles in place.

An impaired Jacoby valiantly battled through her two laps, but the U.S. fell to sixth. The Americans were in eighth when Huske turned it over to Dressel for the closing freestyle leg.

He had far too much of a deficit to make up, only pulling the Americans up to fifth at the finish.

“We didn’t execute well. Fifth-place is unacceptable for USA Swimming, and we’re very aware of that. Our standard is gold,” Dressel said, adding, “I think everyone swam as well as they could have in the moment.”

The British team boasted 100 breaststroke champion Adam Peaty, who moved them from sixth to fourth. Anna Hopkin swam the anchor leg, knowing that Dressel was lurking in the choppy water.

“He’s so fast, it is a bit intimidating,” she said.

No need to worry, though.

Dressel was over 8 seconds off the lead when he took over.

“The guys ahead of me got me such a good lead,” Hopkin said. “He wasn’t catching me.”

The U.S. finish doomed Dressel’s chance to win six golds in Tokyo. He earlier led off the winning 4x100 free relay, and won the 100 free and 100 butterfly. He goes for two more golds in the 50 free and 4x100 medley relay on Sunday, the final day of swimming.

For the second time in the Olympics, the U.S. failed to earn a medal in a relay that it entered, after a fourth-place finish in the men’s 4x200 free relay in Tokyo.

“Next year at worlds, we’ll give it another go and put the pieces together again,” Dressel said.

Dressel said he hadn’t offered any advice to his teenage teammates, pointing out that Jacoby won the 100 breaststroke and Torri Huske, an 18-year-old from Virginia, was fourth in the 100 butterfly.

“Lydia won a gold medal before I did,” Dressel said. “She probably should have been telling me what to do.”

Regardless of the outcome, the mixed relay’s addition to the Olympics brought rave reviews.

“It’s a fun event and that’s what sport needs,” Peaty said. “It needs to be fun.”