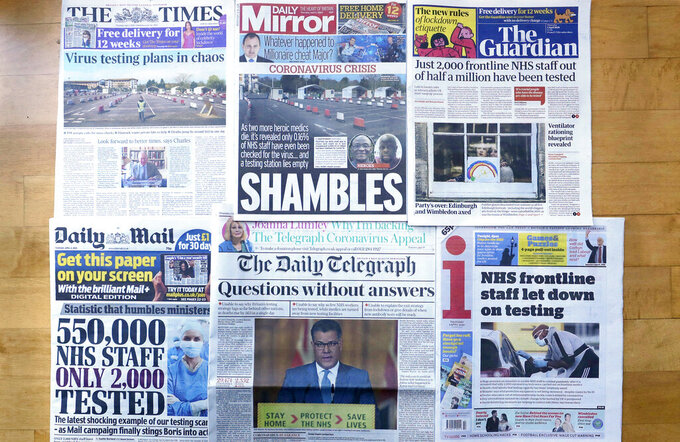 A view of the front pages of Britain's newspapers showing their coverage of the coronavirus, in London, Thursday, April 2, 2020. Newspapers in Britain have criticised the lack of testing NHS staff for the virus. The new coronavirus causes mild or moderate symptoms for most people, but for some, especially older adults and people with existing health problems, it can cause more severe illness or death. (AP Photo/Kirsty Wigglesworth)

CRASH COSTS CRASHING: One of France’s largest auto insurers says costs are crashing as tens of millions of drivers stay home in coronavirus shutdowns. The MAIF said Friday in a letter to clients that it plans to refund some of the savings from a 100 million euro ($108 million) drop in traffic-accident payouts. It said the rebate to MAIF clients with vehicle insurance will likely be about 50 euros ($54) each. They will be given the option to donate the refunds to medical personnel, vaccine research or charity.

MAIF’s chief executive, Pascal Demurger, said traffic accidents are down by 75-80% due to the shutdown, which will last until April 15, possibly longer. “Cars aren’t running, they are in garages and parking lots,” he said on BFM-TV.

$4 TRILLION BILL FOR CRISIS? The Asian Development Bank forecasts that the coronavirus pandemic will cost the world economy as much as $4.1 trillion, or nearly 5% of all economic activity. The regional lender said Friday that growth in developing Asia would likely fall to 2.2% in 2020 from 5.2% last year. The Manila, Philippines-based bank said that Southeast Asia, a market of more than 600 million that has been rapidly growing, will likely log 1% growth this year. China, the region’s biggest economy, saw double-digit contractions in business activity in January-February and will likely see growth fall to 2.3% this year from a three-decade low of 6.1% in 2019, the ADB said. China's losses from shutdowns and other costs due to the pandemic could add up to $692 billion if containment efforts drag on. But the ADB estimated that growth would bounce back next year to more than 7%.

BIG HELP FOR CHINA SMALL BUSINESS: Finance officials have promised to ensure that entrepreneurs who are China’s economic engine get the loans they need to recover from the coronavirus pandemic. The central bank plans to make 1 trillion yuan ($140 billion) available to commercial banks for lending to small and medium-size enterprises, most of which are privately owned.

The ruling Communist Party began easing travel and other restrictions in early March to revive the world’s second-largest economy after declaring victory over the outbreak that began in central China in mid-December.

“We have entered a period of getting the full industry chains back to work,” said a deputy central bank governor, Liu Guoqiang, at a news conference. “We should absolutely not allow a cash crunch in the market.”

The central bank also said this week local governments will be allowed to issue more bonds to finance spending on public works construction and other projects meant to shore up economic growth.

The airline, South Korea's largest, recently put all foreign pilots on unpaid leave for three months and may soon ask its entire workforce of 20,000 to do the same if conditions deteriorate.

The pandemic is expected to wipe out $23 billion in passenger revenue from airlines across the Middle East and Africa this year, according to an assessment Thursday by the aviation industry’s largest trade association.

British Airways reached a deal with unions that will mean no one is fired in the coming weeks and months. The agreement applies to more than 30,000 workers and will mean that the government pays 2,500 pounds ($3,100) of a worker’s monthly salary with British Airways paying the balance up to 80% of an employee’s pay.