Popovich knows filling US Olympic roster may be a challenge 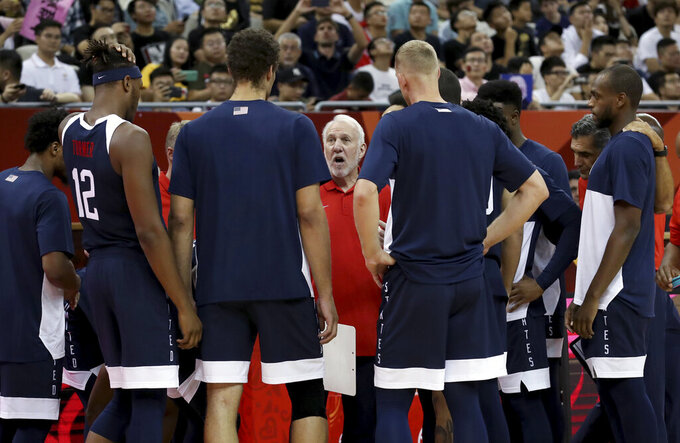 FILE - In this Sept. 1, 2019, file photo, U.S. coach Gregg Popovich talks to players before a Group E match against the Czech Republic in the FIBA Basketball World Cup in Shanghai. Popovich, coach of the San Antonio Spurs, knows that the NBA schedule and how it comes very close to the start of the rescheduled Tokyo Games will be a challenge for USA Basketball to navigate next year when choosing the 12 players who will try to win a fourth consecutive men’s Olympic gold medal. Popovich will be head coach of the Olympic team for the first time. (AP Photo/Ng Han Guan, File)

The opening cermony of the Tokyo Olympics, as of now, would be the next day.

And when presented with this potential scheduling conundrum, San Antonio coach Gregg Popovich — who will coach USA Basketball men’s national team at the next Olympics — came up with a very quick, very lighthearted solution.

All jokes aside, Popovich knows that the NBA schedule and how it comes very close to the start of the rescheduled Tokyo Games will be a challenge for USA Basketball to navigate next year when choosing the 12 players who will try to win a fourth consecutive men’s Olympic gold medal.

Popovich will be head coach of the Olympic team for the first time, succeeding Duke coach Mike Krzyzewski.

“The Olympics is always on my mind, just as Coach K told me it would be,” Popovich said Tuesday. “You can’t get away from it. So, this scenario, as it stands right now, does seem problematic in the sense that organizing things and figuring out who’s going to be part of the team is yet to be determined.”

The pool of finalists — if past form holds, it’ll be around 40 or 50 names — will be revealed by USA Basketball sometime in early 2021, the first step in what the Americans hope is a somewhat normal sequence of events leading up to the Tokyo Games.

The 2016 Olympic team was picked about six weeks before the start of the Rio Games, allowing time for a training camp and exhibitions before heading to Brazil. If the same timetable holds next year — and assuming the NBA schedule isn’t changed along the way — the U.S. Olympic team could be picked in mid-to-late June, around the end of the second round of the NBA playoffs.

“We know there’s so many variables,” said Sean Ford, USA Basketball’s men’s national team director. “We’re going to talk to all the organizations that we can, to try to find a pathway to include as many NBA players in our final roster as possible.”

Plenty of elite NBA players like LeBron James, Stephen Curry, Draymond Green, Devin Booker, James Harden and more all said entering last season that they were interested in playing in the Tokyo Games. That, of course, was months before the coronavirus struck and changed so much.

Many international players — like Milwaukee’s two-time MVP Giannis Antetokounmpo of Greece and Denver’s Nikola Jokic of Serbia — have said they would like to play, but their nations need to still qualify next summer just to get to Tokyo and those qualifying rounds will take place during the NBA playoffs. Toronto coach Nick Nurse is slated to coach Canada in its efforts to qualify; he, too, may face a schedule conflict if the Raptors go deep into the playoffs again.

Popovich sounded confident that the U.S. is more than capable of figuring things out.

“The timing does make everything difficult,” Popovich said. “And it will demand some real soul-searching and out-of-the-box type of thinking to put together the best team we possibly can.”