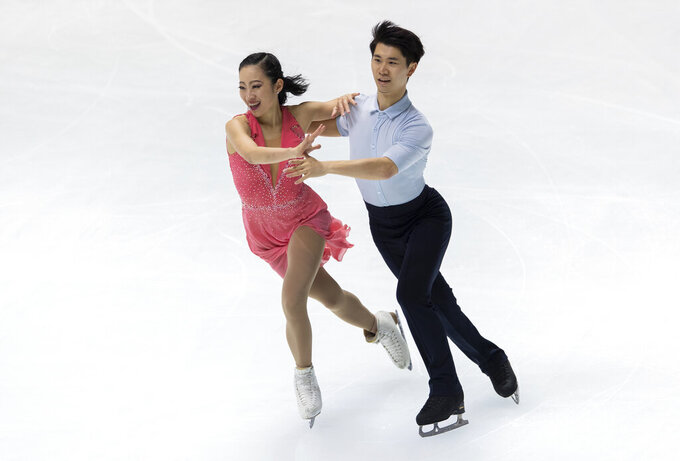 OSAKA, Japan (AP) — Kaori Sakamoto added another jump to her repertoire and came away with the lead after Friday’s short program at the NHK Trophy, the final event of the figure skating Grand Prix series.

The 2018 Four Continents champion from Japan opened her routine with a double axel and added a triple lutz and a triple flip-triple toeloop combination for 75.60 points.

Wakaba Higuchi, the 2018 world silver medalist, fell on her opening triple axel but landed all her remaining jumps to finish second with 69.71 points. Mako Yamashita was third with 67.56 points.

“It was the first time that I had the (triple) lutz and I was able to skate clean,” Sakamoto said. “It is very motivating to skate in front of an audience. In the free program, I hope to have more energy and to keep my position.”

The NHK Trophy normally draws skaters from around the world but was limited to mostly Japanese skaters because of travel restrictions related to the coronavirus pandemic.

Despite concerns about the virus, there was a near-capacity crowd for the opening day program. Japan has managed to keep the virus under control so far but is experiencing a surge in cases.

Vancouver Olympic bronze medalist and 2010 world champion Daisuke Takahashi made his debut in ice dancing, partnering with Kana Muramoto to finish second in the rhythm dance.

Japanese champions Misato Komatsubara and Tim Koleto were first with 70.76 points, followed by Takahashi and Muramoto with 64.15.

“Not everything was the way we hoped and it was not 100%,” Takahashi said. “But the rhythm dance was good. I did not realize how difficult ice dance is so hats off to all the ice dancers.”

Four Continents bronze medalist Yuma Kagiyama led after the men’s short program with 87.26 points, ahead of Kazuki Tomono with 83.27. Lucas Tsuyoshi Honda was third with 79.22 points.

Kagiyama, the world junior silver medalist, started with a quad salchow-triple toeloop combination followed by a quad toeloop but faltered on an axel later in his routine.

“The first half of my short program was almost perfect,” Kagiyama said. “But there were some mistakes in the second half so I was a little disappointed with that but I’m looking forward to the free skate.”

Two-time Olympic champion Yuzuru Hanyu, who has asthma, is not taking part in the men’s program.

The Grand Prix of Figure Skating Final that was to be held as an Olympic test event on Dec. 10-13 in Beijing has been postponed. The Grand Prix events in Canada and France were canceled because of the pandemic.