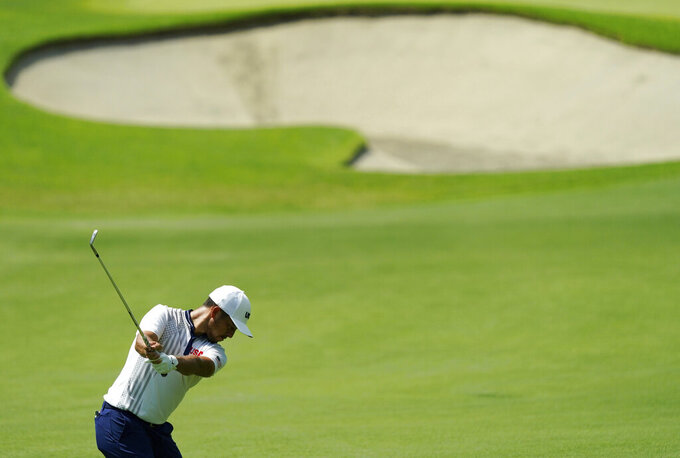 Xander Shauffele of United States plays a shot from the 9th fairway during the third round of the men's golf event at the 2020 Summer Olympics on Saturday, July 31, 2021, in Kawagoe, Japan. (AP Photo/Matt York) 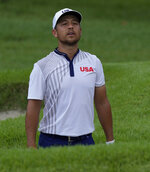 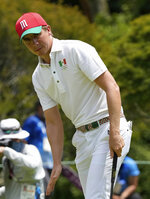 KAWAGOE, Japan (AP) — Just over three weeks ago, Hideki Matsuyama was in isolation for COVID-19 and desperate to record a negative test to have any chance of competing in his home Olympics.

Even when he cleared that hurdle, it was a matter of building endurance for stifling heat and shedding rust from not having played a full tournament since the U.S. Open six weeks ago.

And on Sunday, he steps onto the tee in the final group, one shot behind Xander Schauffele, a gold medal within his reach for a country with high hopes for its Masters champion.

“I definitely could not have believed it,” Matsuyama said after a full Saturday that began with him capping off a 7-under 64 in the rain-delayed second round and then posting a 67.

“To be honest, the endurance part of my game has been struggling a little bit,” he said. “Thankfully, it's held up the last few days. Hopefully, it's going to hold up tomorrow, as well.”

Adding to the test was a medal round at Kasumigaseki Country Club that was wide open.

Schauffele, the 27-year-old American whose mother was raised in Japan, didn't have a lot go his way Saturday until he finished on a strong note, firing a 9-iron to within 3 feet for a birdie and a 68 to keep his one-shot lead.

So wild was the third round that five players had a share of the lead at one point and there was a three-way tie among Schauffele, Matsuyama and Carlos Ortiz of Mexico going down the 18th when the American made birdie.

That left Schauffele 18 holes away from an Olympic gold medal, and the podium still felt like it was miles away.

Schauffele has been trying to treat this as any other tournament, and it felt like one Saturday.

“Tomorrow may feel a little different,” he said. “There’s a little bit more on the line than what we normally play for, and you’re obviously trying to represent your country to the best of your ability. So that’s why I’ll be on the range tonight.”

Joining them in the final group is Paul Casey, who shot a 66 in his bid to keep the Olympic gold medal in golf with Britain. He was two shots behind along with Ortiz, who made bogey from the bunker on the 18th hole.

Justin Rose won the gold in Rio de Janeiro, marking golf's return to the Olympic program after a 112-year absence. It came down to Rose and Henrik Stenson in Rio. This time, eight players were separated by three shots.

“I think it gets knocked quite a bit, doesn't it?” Casey said about Olympic golf on a calendar of four majors. “It's like ‘Why do we need it?’ But the guys that are here are very aware what this means to one person. Well, it will be three medals, but to the gold medalist, it's massive.”

It's particularly enormous for Matsuyama, who raised Japan's expectations when he won the Masters in April.

He played with Schauffele in the final round at Augusta National, starting out with a four-shot lead and sweating it out at the end until Schauffele hit his tee shot into the water on the par-3 16th hole and made triple bogey.

“I’m sure Xander will come out determined to win the gold medal tomorrow,” Matsuyama said.

Thomas Bach, the International Olympic Committee president, joined PGA Tour Commissioner Jay Monahan under a tent next to the first tee to watch the final group start. Even with no spectators, Matsuyama still attracted some 250 people, most of them volunteers, all of them hanging on every shot by Matsuyama.

“It does not feel like we don’t have fans out here,” Matsuyama said.

Action came from every corner of Kasumigaseki.

Rory McIlroy, indifferent about the Olympics until he arrived in Tokyo and already looking forward to Paris in 2024, made an early move until he was slowed by a poor pitch that kept him from birdie on the par-5 14th and a three-putt bogey on the 16th hole. He bounced back with a birdie and finished with a 67.

McIlroy was three shots behind, along with Sebastian Munoz of Colombia (66), Mito Pereira of Chile (68) and Sepp Straka of Austria (68).

All were very much in the mix for gold. Others were still hopeful of any medal, a list that suddenly includes Sungjae Im. The 23-year-old South Korean needs an Olympic medal to earn an exemption from mandatory military service, though this isn't his last chance.

Im was 12 shots out of the lead and was the third player this week to match the Olympic record with a 63. He was still seven behind, though another big round could keep him in bronze range.

Matt Kuchar came out of nowhere with a 63 on the final day in Rio to take the bronze.

“It's like top 3 or nothing, right?” McIlroy said. “So yeah, you’re taking peeks and glances at it and seeing how far off the pace you are. There’s still 18 holes is a lot of golf still and a lot can happen. I need to go play a good round of golf tomorrow and see how it all unfolds.”