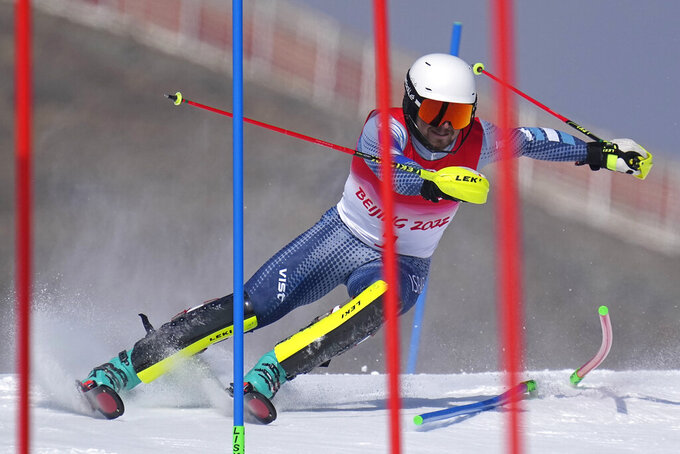 Barnabas Szollos, of Israel passes a gate during the slalom part of the men's combined at the 2022 Winter Olympics, Thursday, Feb. 10, 2022, in the Yanqing district of Beijing. (AP Photo/Robert F. Bukaty)

BEIJING (AP) — Israeli skier Barnabas Szollos was happy to have the No. 1 bib so he could get a chance to sit in the leader’s box after the downhill run of the Alpine combined at the Beijing Olympics.

He thought his moment in the spotlight would end there.

When he followed his 11th-place finish in the downhill with the second-best slalom time and wound up an unexpected sixth, he had achieved Israel’s best-ever individual result at the Winter Games.

“This,” Szollos said, “is more than I expected.”

Szollos was born in Hungary and raised in Austria but gained Israeli citizenship through his father, who used to coach the national team. He and his two siblings — his sister Noa is also competing in Beijing — have Israeli passports.

He’s been to Israel only twice.

“It’s a nice country (but) for me it’s a bit too hot,” Szollos said. “You know when you live all the time in Austria and it’s cold, you prefer the cold.”

Szollos was not raised Jewish and does not understand Hebrew.

“I speak Hungarian, German and English but not Hebrew yet,” he said.

Israelis can ski at Mount Hermon in the Golan Heights but Szollos has not skied there yet.