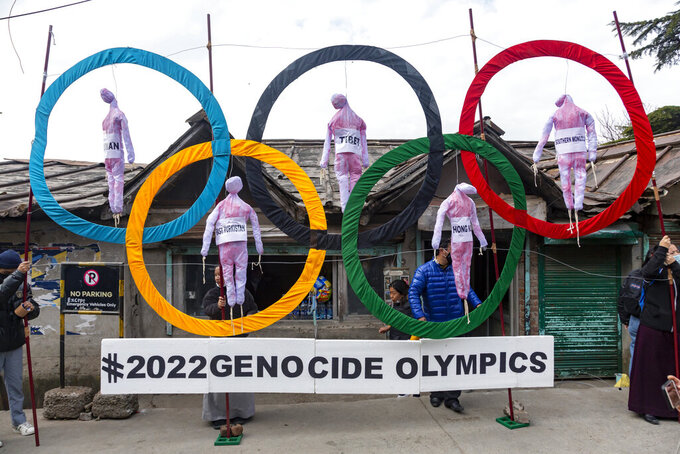 FILE - Exiled Tibetans use the Olympic Rings as a prop as they hold a street protest against the holding of 2022 Winter Olympics in Beijing in Dharmsala, India on Feb. 3, 2021. Leading sponsors of the Beijing Winter Olympics should explain publicly why they remain silent about alleged human rights abuses in China with the Games opening there in just under three months, Human Rights Watch said Friday, Nov. 12, 2021 in a statement. (AP Photo/Ashwini Bhatia, File)

Leading sponsors of the Beijing Winter Olympics should explain why they remain largely silent about alleged human rights abuses in China with the Games opening there in just under three months, Human Rights Watch said Friday.

The rights group said in an on-line briefing that it had reached out to all but one of the IOC's so-called TOP sponsors — and leading broadcast rights holder NBC — in lengthy letters almost six months ago.

The only reply came from sponsor Allianz, which it wrote only last month.

“We stand behind the Olympic Movement and our longstanding support for its ideals will not waver,” Allianz said.

The letters asked sponsors to be aware of the rights climate in China, and to scrutinize supply chains and other operations to assure they do not “contribute to human rights violations.”

“There are just three months until the Beijing 2022 Winter Olympics, but corporate sponsors remain silent over how they are using their influence to address China’s appalling human rights record,” Sophie Richardson, China director at Human Rights Watch, said in a statement.

The statement said sponsors risk "being associated with an Olympics tainted by censorship and repression.”

Two sponsors — Dow and General Electric — have completed contracts with the IOC that ended with the recent Tokyo Olympics.

In total, TOP sponsors paid about $1 billion in cash and in-kind payments to the IOC in the 2013-2016 Olympic cycle, a figure that was expected to double when complete figures are released for the 2017-2020 cycle. This cycle has been delayed by the one-year postponement of Tokyo due to the pandemic.

“The time for quiet diplomacy is over," said Minky Worden of Human Rights Watch during the briefing. “It's time for the TOP sponsors to urge the International Olympic Committee to adopt human rights. It's time for them to disclose their own supply chains in China, particularly any products that have the five rings of the Olympics.”

“To politicize sports by fabricating lies and rumors and undermining the Olympic cause is unpopular and will never succeed,” Wang told media at a daily briefing.

The statement from the rights group comes just three days after a global trade union group issued a scathing report that questioned the propriety of China holding the Games in the face of alleged genocide and crimes against humanity reportedly taking place in the Xinjiang in northwestern China.

The report from the International Trade Union Confederation is titled “ China: A gold medal for repression.”

China has repeatedly denied that a genocide is taking place, terming it the “lie of the century.” It has said camps in northwestern China are for education, not arbitrary internment of a reported 1 million Uyghur Muslims and other religious and ethnic minorities.

American and European lawmakers and activist groups have asked the Games be postponed or moved from China. Center Enes Kanter of the NBA's Boston Celtics, a Muslim with roots in Turkey, has criticized China's rights record and called General Secretary Xi Jinping a “brutal dictator.”

For its part, the IOC says its only focus is sports and has no remit to act on the polices of a sovereign state. The IOC does, however, hold an observer seat at the United Nations, unlike any other sports business.

“We have a lot of respect for other organizations that have other purposes in life,” Juan Antonio Samaranch, the IOC member in charge of Beijing preparations, said earlier this week in responding to the ITUC report. “But we believe that our responsibility is what it is — celebrate the Olympic Games as a celebration of humanity, altogether, despite our differences."

Most of the IOC sponsors have signed on to the so-called United Nations Guiding Principles on Business and Human Rights. They spell out the obligation of states and businesses to “respect, protect and fulfil human rights and fundamental freedoms.”

When the IOC awarded Beijing the 2008 Summer Olympics it said they would improve human rights in China.

“The failure of Chinese authorities to uphold the rights-related commitments they made to win the 2008 Summer Olympic Games, and their deepening repression since that time, make clear that the government cannot be expected to respect human rights around the 2022 Winter Games,” Human Rights Watch said.