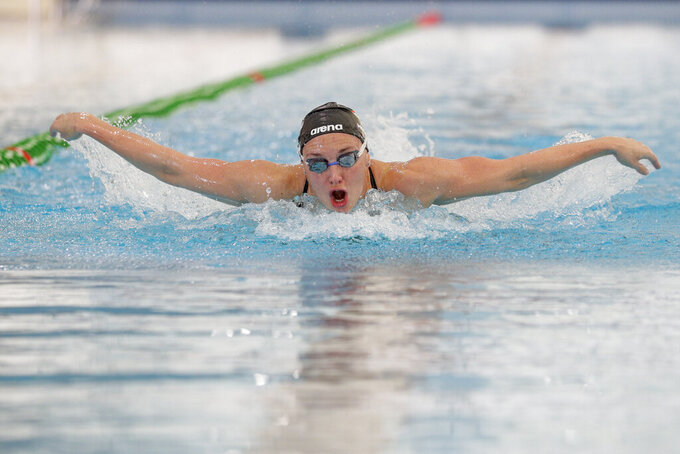 FILE - In this Feb. 26, 2020, file photo, Hungarian swimmer Katinka Hosszú practices during a training session, in Naples. It’s different strokes for different folks in swimming. That makes sense for a sport that will hand out medals in a whopping 35 different pool events at the Tokyo Olympics. Hosszú says the Hungarians' medley success can be attributed to work ethic. She adds that "we are very stubborn and very much hard-working and we can just grind it out.” (AP Photo/Andrew Medichini, File)

TOKYO (AP) — The Hungarians like medleys. The Dutch have been known to dominate in sprinting. The Japanese specialize in breaststroke. The Swedes excel at butterfly.

In a sport like swimming, where medals will be handed out in a whopping 35 different pool events at the Tokyo Olympics, it makes sense that many countries focus on a single stroke or event.

“It’s all about which role models you have when you grow up,” said Sarah Sjöström, the Swedish standout who has won one Olympic gold and seven world titles in butterfly events.

No wonder why Sjöström has built her career around the fly and free sprints, as well as the 200 free.

Butterfly is popular in Hungary, too, although that’s part of a bigger tradition that’s all about the grueling medley events that feature all four strokes: butterfly, backstroke, breaststroke and freestyle.

Four of the six Olympic medals won by László Cseh between 2004 and 2012 came in IM and then Katinka Hosszú swept gold in the IMs four years ago in Rio de Janeiro.

“For us Hungarians, we are very stubborn and very much hard-working and we can just grind it out,” said Hosszú, who is nicknamed the “Iron Lady.”

“The 400 IM is where Hungary gets a lot of respect, because a 400 IM is really about how much work you put in,” Hosszú added.

“We are tall people and we are a very small country, so we have to train wisely,” Heemskerk said. “In Hungary they’re used to hard work from a very young age. We don’t do that, so maybe that’s why we sprint.”

Russia also has a tradition of producing great freestyle sprinters, led by Alexander Popov; as do the French with Alain Bernard and Frédérick Bousquet paving the way for current contender Florent Manaudou.

There are exceptions to the rule, of course.

Kira Toussaint is the rare Dutch backstroker and Arno Kamminga, another Dutch swimmer, races breaststroke. While Toussaint is the daughter of an Olympic backstroking champion, both she and Kamminga attribute their stroke choices to their body sizes: they are shorter and stockier than their sprint teammates.

“I’m not that long or tall,” Kamminga acknowledged. “But I always loved the breaststroke. … I’m just happy to be competing with the best of the world."

Even the United States and Australia, swimming's two powerhouse teams, have their pet events.

For the U.S., it’s the men’s 100 and 200 backstroke, where the team’s last Olympic loss for both events came in 1992. Ryan Murphy, who swept both races in Rio, will attempt to keep the streak going next week, building on a legacy that has also included doubles from Lenny Krayzelburg and Aaron Peirsol.

These days, Italy is a force in the distance events, with both Gregorio Paltrinieri and Simona Quadarella medal favorites in the 1,500.

In breaststroke, the host country’s rising star is 20-year-old Shoma Sato. The bar was set high by Japanese great Kosuke Kitajima, who swept both breaststroke events at the 2004 and 2008 Games.

“(Kitajima) transformed the way breaststroke was swam,” said Christian Minotti, Quadarella’s coach. “He modernized the stroke and made it more creative and fluid.”