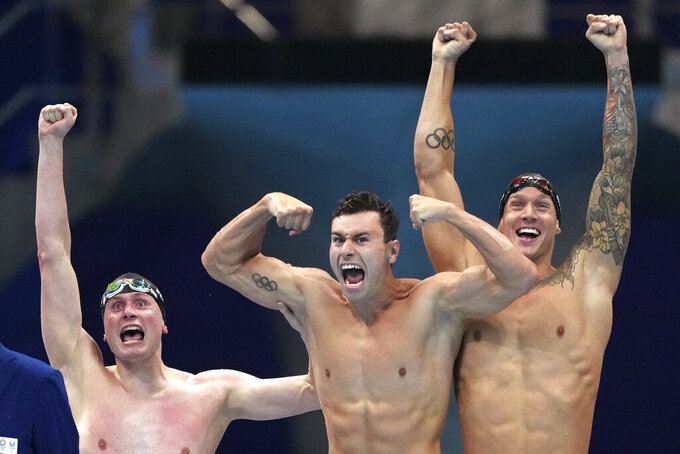 Titmus lived up to the billing of her nickname the “Terminator” when she chased down Katie Ledecky in the 400 freestyle Monday to win one of the most anticipated races of the Summer Games.

Doncic scored 48 points in his first Olympic appearance to tie for the second most ever in men’s basketball history, leading Slovenia to a 118-100 victory over Argentina.

Titmus trailed by nearly a full body-length at the halfway mark of the eight-lap race before erasing the gap and finishing in 3 minutes, 56.69 seconds. It was the second-fastest time in history, surpassed only by Ledecky’s world record of 3:56.46 from the 2016 Rio Games.

“It’s probably the biggest thing you could pull off in your sporting career,” Titmus said, “so I’m over the moon.”

Ledecky lost an individual Olympic final for the first time after winning the 800 free at the 2012 London Games, then capturing three more golds in the 200, 400 and 800 free at Rio de Janeiro five years ago.

Doncic scored 31 points in the first half, putting him on pace to break the Games’ scoring record of 55 points by Brazilian Hall of Famer Oscar Schmidt in 1988. He ended up tied with Eddie Palubinskas, who had 48 for Australia in the 1976 Games in Montreal.

“I don’t care about records,” he said. “We got a win and that’s what we came here for.”

Caeleb Dressel started his quest for six gold medals in swimming by leading the United States to victory in the men’s 4x100-meter freestyle relay.

Dressel, who has been hailed as the successor to Michael Phelps, gave the U.S. the lead in the opening leg and his teammates made sure it stood up.

Dressel is competing in three individual events and two more relays in Tokyo.

Nikita Nagornyy nailed his floor routine with the entire gym watching, and the Russian men completed their long climb back to the top of the gymnastics world by edging Japan and China in the team final.

It's the first Olympic title for the Russians since the 1996 Atlanta Games.

Nagornyy needed a score of 14.564 to deliver gold, and the reigning world champion came through with a 14.600.

The team representing the Russian Olympic Committee finished with 262.500 points, just good enough to hold off the sport’s other two superpowers. Japan used a brilliant high bar routine by Daiki Hashimoto in the final rotation to surge past China for second with a score of 262.397.

The Chinese were undone by a fall from Lin Chaopan on floor exercise during the first rotation.

A dramatic comeback for the U.S. softball team against Japan earned the Americans a small prize. When the countries play again it will be for the gold medal.

Kelsey Stewart homered leading off the seventh inning to lead the U.S. to a 2-1 victory to win the group stage and give it the right to bat last in the gold medal game. The longball was the first for the United States this tournament.

“It’s like you dream about when you’re a little kid, about hitting a home run at the Olympics, let alone a walkoff,” Stewart said.

Monica Abbott pitched a perfect seventh in relief for her third win of the tournament. She is likely to start Tuesday’s gold medal game, a day before her 36th birthday.

The Americans lost the gold medal game 3-1 to Japan in 2008, the previous time softball was in the Olympics.

Youth was served at the debut of the Olympic skateboarding event for women.

Both Nishiya and Leal became their countries’ youngest ever medalists.

“Now I can convince all my friends to skateboard everywhere with me,” Leal said.

Naomi Osaka and Novak Djokovic easily advanced to the round of 16 at Ariake Tennis Park. Osaka crushed winners off both wings — forehand and backhand — seemingly at will in a 6-3, 6-2 victory over 49th-ranked Viktorija Golubic of Switzerland.

Djokovic dispatched 48th-ranked Jan-Lennard Struff of Germany 6-4, 6-3 to move one step closer to claiming the fourth title of a Golden Slam — victories in all four Grand Slam tournaments and Olympic gold in the same calendar year.

Canadian midfielder Quinn became the first openly transgender athlete to participate in the Olympics when they started in a 1-1 draw against Japan in women's soccer.

Quinn, who is nonbinary and uses they/them pronouns, posted their feelings on Instagram.

“I feel proud seeing 'Quinn’ up on the lineup and on my accreditation. I feel sad knowing there were Olympians before me unable to live their truth because of this world,” they wrote. “I feel optimistic for change. Change in legislature, changes in rules, structures, and mindsets.”

Quinn, who came out as transgender last year, was also a member of the Canadian team that won the bronze medal at the 2016 Rio de Janeiro Olympics.

A second judo athlete has dropped out of the Olympics before facing Israel’s Tohar Butbul in the 73-kilogram division.

Olympic officials say Sudan’s Mohamed Abdalrasool didn’t show up to face Butbul in their round of 32 bout Monday despite weighing in for the bout earlier.

Algeria’s Fethi Nourine was sent home from the Tokyo Games and suspended by the IJF on Saturday after he withdrew to avoid a potential round of 32 matchup with Butbul. Nourine was supposed to face Abdalrasool for the right to meet Butbul.