Tokyo under 'emergency orders' with Olympics 3 months away 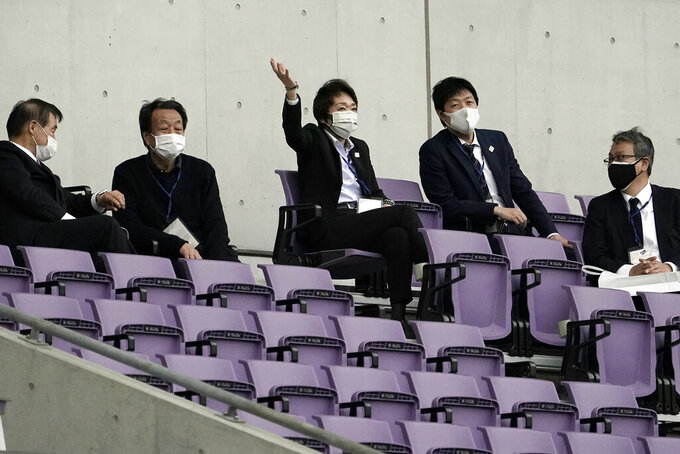 TOKYO (AP) — Only three months before the postponed Olympics are set to open, Tokyo and Japan's second largest metropolitan area of Osaka have been placed under emergency orders aimed at stemming surging cases of the coronavirus.

The measures, which take place during Japan's “golden week” holiday period, are meant to limit travel and keep people out of public places. They are to end on May 11, just ahead of a widely reported visit to Hiroshima by International Olympic Committee President Thomas Bach.

Bach said this week that the visit, reported for May 17-18, is still in the “planning phase.” But Bach's presence was immediately criticized by opposition lawmakers who say the Olympics are being prioritized ahead of public safety.

“Japan should decide its own public health policies. There is no reason we should be told by Mr. Bach what to do," said Yuichiro Tamaki, the head of the Democratic Party for the People.

Bach said the duration of the state of emergency had nothing to do with his planned visit to the city, where he would greet the Olympic torch relay. Hiroshima was destroyed in 1945 by the American detonation of an atomic bomb over the city, and is a favorite backdrop for visiting politicians and dignitaries.

“This (state of emergency) is absolutely in line with the overall policy of the government,” Bach said. “But it is not related to the Olympic Games. It is related to the golden week.”

Japan's third state of emergency is to include shutdown orders for bars, department stores, malls, theme parks, as well as theaters and museums. Even restaurants that do not serve alcohol are being asked to close early, as well as public transportation. Schools will stay open, but universities are asked to return to online classes.

“I hope that the situation is going be better as soon as possible," Seiko Hashimoto, the president of the organizing committee, said Friday in a online briefing.

Japan has attributed about 10,000 deaths to COVID-19, good by global standards but poor by standards in Asia. It has vaccinated less than 1% of the population and has not enforced lockdowns with people becoming impatient and less cooperative as cases have again accelerated.

Hashimoto said several test events would continue during the emergency period, but without fans. The Olympics open on July 23.

She was asked again if there were any plans to cancel the Olympics. The question had disappeared at briefings, but has surfaced again in the last several weeks.

“As the organizing committee, we are not thinking about cancellation,” Hashimoto said.

The IOC gets almost 75% of its income from selling television rights and has seen that cash flow stalled by the postponement. It needs the games to happen, which will be followed in six months by the boycott-threatened Beijing Winter Olympics.

Tokyo is officially spending $15.4 billion to organize the Olympics, with several government audits suggesting the number is much larger.

The IOC and organizers are hoping to muffle more cancellation questions next week by rolling out the second edition of the “Playbooks,” guides that are to explain how the Olympics can be held safely in a pandemic.

The first edition rolled out in February was vague. Next week promises to offer more details and is likely to include requirements that 15,400 Olympic and Paralympic athletes be tested almost daily while in Japan.

The IOC has said vaccinations are not required to participate in the Olympics, but it has encouraged all athletes to be vaccinated.

The Playbooks are not expected to offer a decision on venue capacities, nor if any fans will be allowed at all. Fans from abroad have already been banned.

Hashimoto, who participated in seven Olympics as an athlete and won a bronze medal in speedskating at the 1992 Albertville Games, has been open about her concerns. Between 70-80% of the Japanese public polled say they games should not go on.

“I understand a lot of people are worried and also healthcare workers might be worried,” Hashimoto said. “I think about the feelings of those people — every day I think about this.”