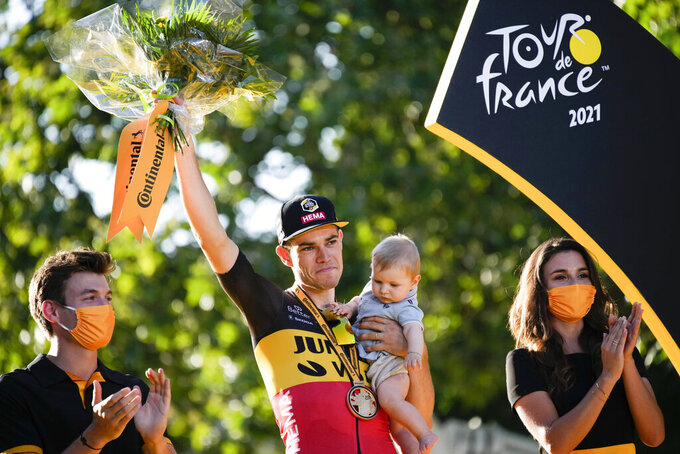 Stage winner Belgium's Wout Van Aert celebrates on the podium after the twenty-first and last stage of the Tour de France cycling race over 108.4 kilometers (67.4 miles) with start in Chatou and finish on the Champs Elysees in Paris, France,Sunday, July 18, 2021. (AP Photo/Christophe Ena)

Wout van Aert had just concluded one of the most remarkable performances of anyone in the Tour de France with a thrilling sprint victory on the Champs-Elysees in Paris when he was asked about his Olympic ambitions.

The breakthrough Belgian star, who also won a time trial and mountain stage on the iconic Mount Ventoux, will be lining up at Musashinonomori Park on Saturday for the road race before tackling the time trial a few days later.

“I guess I'll try to win both,” he said with what amounted to an audible shrug, “but of course it's going to be really difficult. Though for now, I'm still overwhelmed by the victories of this weekend.”

There's the rub: Nobody quite knows how van Aert and the rest of the riders who will be jetting from the finish line in Paris to the starting line in Tokyo this week will perform after three hard weeks riding around France. Cycling stands out among Olympic sports for having its biggest, most prestigious event serving as an appetizer to the Summer Games. Overall Tour winner Tadej Pogecar of Slovenia will also be competing in Tokyo.

Only two riders to compete in the last five Olympics won a stage at the Tour before winning a road race medal, and one of those stage wins was Fabian Cancellara's victory in a time trial in 2008. The other was Greg van Avermaet, who struck gold at the Rio Games after winning the sixth stage of the Tour to cement his status as Olympic favorite.

Much like his countryman van Aert did this year.

Other riders have also used the Tour to ride into form for the Olympics.

Paolo Bettini spent eight days wearing the king of the mountains jersey before winning gold at the 2004 Athens games, where Axel Merckx — who eventually won the king of the mountains classification — grabbed the bronze medal for Belgium. And at the 2000 Games, Germany's Jan Ullrich followed his second-place Tour finish to Lance Armstrong — who, of course, was stripped of his win — by winning the gold medal in Sydney from a three-man breakaway.

But for the most part, the three-week grind of the Tour de France tends to leave riders weary when they line up for the Olympics. After all, it's the Tour rather than the once-every-four-years Summer Games that they target above all else.

Take as an example the 2012 London Games. The British were still celebrating three stage wins by sprint superstar Mark Cavendish along with Bradley Wiggins' overall title at the Tour de France the previous week when the duo lined up on The Mall with the hopes of the home nation riding on their shoulders.

Everything unraveled for the four-man British squad, though. Wiggins and teammates David Millar, Ian Stannard and Chris Froome never factored into the race, and Cavendish missed the key move, leaving him out of position to sprint for the win.

Or take the 2008 Beijing Games, where Spain was the powerhouse nation. Alejandro Valverde had won two stages at the Tour, and Olympic teammates Oscar Freire and Carlos Sastre also won stages — as did Juan Jose Cobo and Luis Leon Sanchez, who weren't even chosen for the Olympic road race. Yet it was Samuel Sanchez who made good for the Spaniards when he timed the break perfectly and won a reduced sprint to bring home the surprising gold medal.

In some cases, riders who might have been Olympic favorites don't even make it to the start line after the Tour concludes.

That's the case for Peter Sagan, the versatile three-time world champion who competed in mountain biking in Rio but would have been among the favorites this year given a course that perfectly suits his abilities.

Yet the Slovakian standout was forced to abandon the Tour after a Stage 3 crash left him with a wound to his knee that eventually became infected. Sagan had surgery last week in Monaco to clear it out and harbored hopes of lining up in Tokyo, but the Slovak Olympic Committee made the decision to replace him with Lukas Kubis for Saturday's road race.

"We did everything possible at the Tour, but even antibiotic treatment couldn’t prevent an infection,” said the physician for Sagan's Bora-Hansgrohe team, Christopher Edler. “The only option was to stop racing and get the bursa surgically removed. ... The surgery went well, and I think Peter will be able to start with light training again in a couple of days.”

Also dropping out of the Olympics was Jack Haig, who broke his collarbone during the same third stage of the Tour. He also held out hope of lining up in Tokyo for Australia, but his recovery did not proceed as quickly as he hoped.

"Unfortunately my fracture was much worse than first expected. The surgery was long and more invasive than normal, making the recovery period longer,” Haig wrote on Instagram. “I should hopefully be outside on the bike by the end of this week. Unfortunately, this means I will be missing out on the Olympics.”