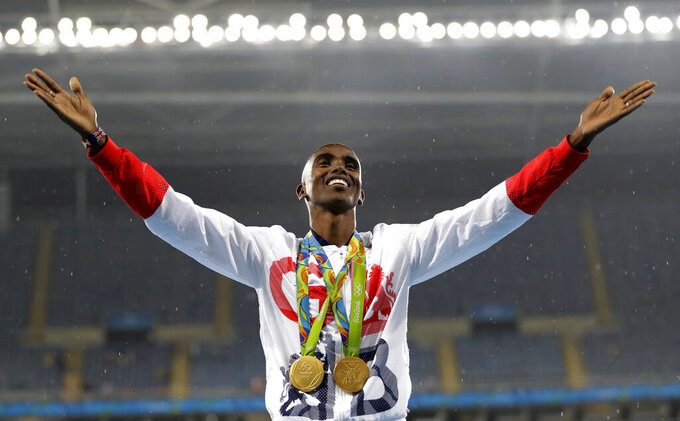 FILE Britain's Mo Farah celebrates winning the gold medal, in the men's 5000-meter medals ceremony, during the athletics competitions of the 2016 Summer Olympics at the Olympic stadium in Rio de Janeiro, Brazil, Saturday, Aug. 20, 2016. Four-time Olympic champion Mo Farah has disclosed he was brought into Britain illegally from Djibouti under the name of another child. The British athlete made the revelation in a BBC documentary. (AP Photo/Jae C. Hong, File)

LONDON (AP) — Olympic great Mo Farah -- the winner of four gold medals and one of Britain’s greatest and best-loved athletes -- has been carrying a secret burden all these years: He was illegally brought to the U.K. as a youth and forced to care for other children before he escaped a life of servitude through running.

In a new documentary, Farah says his real name is Hussein Abdi Kahin and that he was from taken from the East African nation of Djibouti when he was about 8 or 9. He says a woman he didn’t know brought him to Britain using fake travel documents that included his picture alongside the name Mohammed Farah.

The revelations come as Britain struggles to deal with a surge of people fleeing conflict and hunger in Africa, the Middle East and Asia on flimsy boats organized by human traffickers who assist the desperate to cross the English Channel. Criminal gangs are also smuggling people into the country and forcing them into sex work, criminal activities and unpaid labor.

In the documentary, produced by the BBC and Red Bull Studios, Farah said he thought he was going to Europe to live with relatives and had piece of paper with the contact details.

“The lady took it off me and right in front of me ripped them up and put it in the bin,’’ Farah said in the film, to be broadcast Wednesday. “And at that moment I knew I was in trouble.”

The woman took him to an apartment in west London where he was forced to care for her children, Farah said. He wasn’t allowed to go to school until he was 12.

“I wasn’t treated as part of the family,” Farah said. “If I wanted food in my mouth, my job was to look after those kids — shower them, cook for them, clean for them.”

Farah was granted U.K. citizenship in 2000 and represented Britain at three straight Summer Olympics starting in 2008. He captured hearts in Britain and elsewhere with the look of joy and astonishment after his triumph in the 5,000 meters at the 2012 London Games after earlier winning the 10,000-meter title. He won the same races at the 2016 Games in Rio de Janeiro.

He was knighted by Queen Elizabeth II in 2017.

Farah previously said he had moved to Britain with his parents as a refugee from Somalia. But in the documentary, he says his parents never were in the U.K. His father was killed by gunfire during unrest in Somalia when Farah was 4, according to the film. His mother and two brothers live on the family farm in Somaliland, a breakaway region of Somalia that is not internationally recognized.

Farah says his fortunes changed when he was finally allowed to attend school. A teacher who was interviewed for the documentary recalled a 12-year-old boy who appeared “unkempt and uncared for,” was “emotionally and culturally alienated” and spoke little English.

But he began to blossom on the track and eventually told his story to a physical education instructor. The teacher contacted local officials, who arranged for a Somali family to take him in as a foster child.

“I still missed my real family, but from that moment everything got better,” Farah said. “I felt like a lot of stuff was lifted off my shoulders, and I felt like me.”

Farah said he had feared he would be deported if he spoke about his childhood experiences. He decided to tell his story to publicize and challenge people’s perceptions of human trafficking, he said.

“I had no idea there was so many people who are going through exactly the same thing that I did,” he said. “It just shows how lucky I was.”

In 2020, more than 10,000 people were referred to authorities in Britain as potential victims of modern slavery, up from 2,340 in 2014, according to the Home Office, the government agency responsible for border enforcement.

Immigration authorities are also under pressure as the number of people entering the country on small boats jumped to 28,526 last year from 299 in 2018, government statistics show.

The U.K. has struck a deal with Rwanda to send some asylum seekers on a one way voyage to the East African nation, where they would be able to apply for asylum. While Prime Minister Boris Johnson says this will break the business model of the criminal gangs who charge migrants thousands of pounds to cross the Channel, immigration rights groups say it is illegal and inhumane.

But modern slavery doesn't only affect migrants. Nongovernmental organizations are at pains to insist that victims of modern slavery are forced into servitude bound by coercion and violence rather than shackles. Such organizations have often found it difficult to put a human face on the crime, fearing that exposure will inflict further trauma. That alone makes Farah's case unique.

Justine Carter of Unseen, a charity that deals with victims of modern slavery, stresses that it takes courage to overcome such conditions. Farah’s revelation will let people around the world know that modern slavery can happen anywhere.

“I just have to take my hat off to somebody who has come through that trauma and has lived that experience, but has actually still succeeded in life, because I think there are far too many people that, for them the trauma is too much and unfortunately don’t have the right support mechanisms in place to kind of thrive and move on with their lives," she said.

Besides raising awareness, Farah’s example could encourage others to seek help.

“There is always a way out, an alternative, a channel that you can go down. And I think Mo Farah has been living, breathing proof of that,” she said.

Britain’s Home Office said no action would be taken against Farah — and not just because he is a prominent athlete.

Home Office guidance makes clear that the agency assumes a child is not complicit in gaining citizenship by deception, stating: “If the person was a child at the time the fraud, false representation or concealment of material fact was perpetrated, the caseworker should assume that they were not complicit in any deception by their parent or guardian.”

“Everything Sir Mo has survived proves he’s not only one of our greatest Olympians but a truly great Briton,’’ Khan tweeted. “@Mo Farah thank you for sharing your story & shining a spotlight on these awful crimes. We must build a future where these tragic events are never repeated.”

Usain Bolt, an eight-time Olympic champion sprinter from Jamaica, posted three emojis of folded hands - sometimes referred to as “prayer hands” - on Farah’s Instagram page. Andrew Butchart, Farah’s teammate in 2016 and sixth-place finisher in the 5,000 meters in Rio, posted “Much love” and “very proud” along with a heart emoji.