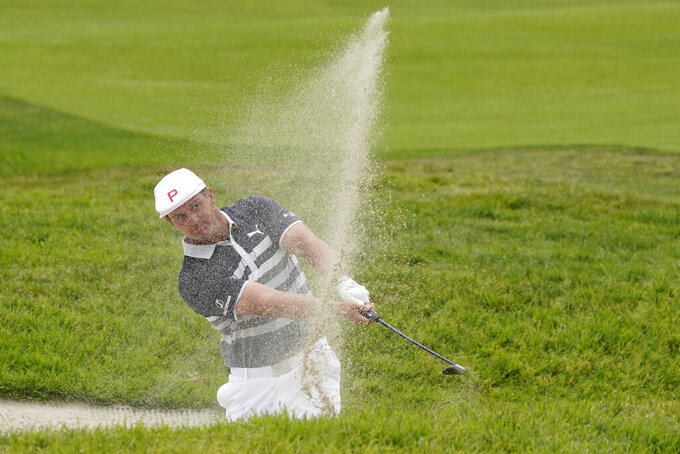 Bryson DeChambeau plays a shot from a bunker on the 13th hole during the final round of the U.S. Open Golf Championship, Sunday, June 20, 2021, at Torrey Pines Golf Course in San Diego. (AP Photo/Marcio Jose Sanchez)

Bryson DeChambeau grew up watching the Olympics and wishing that someday he would be able to take part.

As a golfer, he knew that was a bit of a stretch.

Although the sport was a part of the Olympic program early in the 20th Century, it was dropped from 1904 until it returned for Rio de Janeiro in 2016.

“There was never a thought in my mind — before 2016, obviously — that I thought I was going to be in the Olympics,” he said this week after making the field for the Tokyo Games. “I never would have thought that. Playing as good as I have these last few years has afforded me that opportunity."

DeChambeau, 27, was one year removed from his amateur days in 2016, and didn’t come close to earning one of the four U.S. spots in the Olympic field. Now the sixth-ranked golfer in the world, he is one of four Americans selected for the 60-man field that will play at the Kasumigaseki Country Club outside of Tokyo from July 30-Aug. 8.

Justin Thomas, Collin Morikawa and Xander Schauffele will also represent the U.S.; world No. 2 Dustin Johnson has opted out.

DeChambeau said he remembers loving Olympic table tennis as a child and seeing Michael Phelps dominate the swimming in Athens and Beijing. Most of all, he hoped to someday be able to march into an Olympic stadium in the opening ceremony.

“When I missed it in Rio in 2016, I was like ’Man, that’s a goal of mine that I want to check off the list.′ I want to be an Olympian for the American team,” he said. “And I’m very fortunate to say that I’m an Olympian now.”

DeChambeau said Rickie Fowler, who played in Rio, said it was “the coolest experience ever.”

Not that he needed any convincing.

“As of right now, I am definitely going,” he said, acknowledging that the games have already been postponed for a year because of the COVID-19 pandemic and Japan remains in a partial lockdown. “If something was crazy to happen, obviously, we all wouldn’t be going."

The 2020 U.S. Open champion, DeChambeau was leading this year's tournament with nine holes to play before imploding on the back nine at Torrey Pines. He made back-to-back bogeys on Nos. 11 and 12, then took a triple on the 13th hole and a quadruple bogey on the 17th.

He finished the final round with a 6-over 77, nine strokes behind winner John Rahm.

This week brings him to TPC River Highlands outside of Hartford, Connecticut, for the Travelers Championship. Five of the world's top 10 players are in the field, including Johnson, Patrick Reed and Brooks Koepka.

DeChambeau has played in the tournament five times, never missing the cut and finishing in the top 10 the last three years.

“It fits my game pretty well. Hopefully I can fix the driver a little bit more — still struggling with that. The miss-hits are a little too wild. And that’s what I’m looking to change for this week,” he said. “If I can do that, I think I have a good chance to contend.”

DeChambeau also said he was eager to get back in front of fans after playing last year's tournament on an empty course. If that brings out the hecklers trying to stoke his feud with Koepka, that's fine, too.

“It’s something that just rolls right off my back,” he said. “People think it bothers me. It doesn’t. At all. It’s, like, just an afterthought to me. I hear it and it doesn’t even register in my head anymore. So people can keep saying it if they want. I've got no issue with it. It’s funny, if anything.”

And good for golf?

"There’s some good aspects to it," he said. “Now when you start saying it during somebody's golf swing, it’s different. But, you know, walking down the fairway, whatever? No harm, no foul.”