WHAT TO WATCH: Football, then ice dancing on big day for NBC 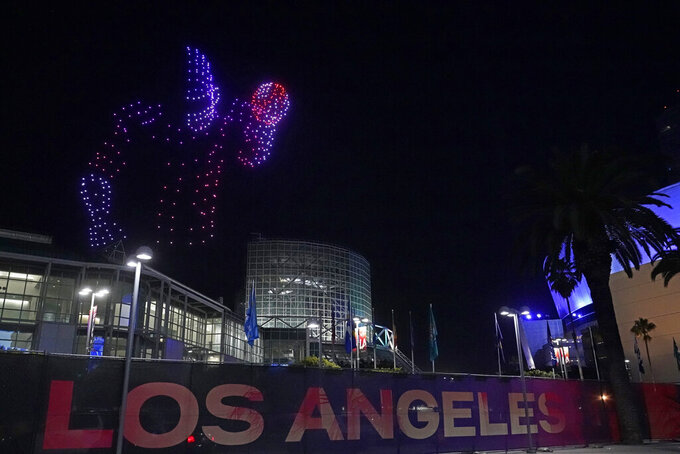 Five hundred drones form the shape of a football player and fly over the Los Angeles Convention Center during the Super Bowl LVI Drone Show Friday night, Feb. 11, 2022. The Rams are scheduled to play the Cincinnati Bengals in the Super Bowl on Sunday, Feb. 13. (AP Photo/Damian Dovarganes)

BEIJING (AP) — Sunday is a sports bonanza for NBC, which is airing the Super Bowl in addition to the Winter Olympics. It's the first time those two events are happening at the same time, and the chance to air them both is part of the reason NBC switched Super Bowl spots with CBS and took this year's game.

The football game is obviously forcing some changes in NBC's Olympic schedule. Instead of its usual afternoon and prime time slots, NBC will have coverage from 8 a.m. ET until Super Bowl pregame coverage at noon. Olympic coverage picks up again after the game, when NBC plans to show live coverage of ice dancing's free dance.

For those uninterested in the football game, USA Network will also carry the ice dancing live, starting at 8:15 p.m.

Gabriella Papadakis and Guillaume Cizeron of France lead after the rhythm dance, with world champions Victoria Sinitsina and Nikita Katsalapov of Russia second. The American duos of Madison Hubbell and Zachary Donohue and Madison Chock and Evan Bates are third and fourth.

Papadakis and Cizeron finished second at the 2018 Olympics to the now-retired Canadian team of Tessa Virtue and Scott Moir.

“These Olympics are so different from four years ago. We are in a very different place," Cizeron said. “I think with all the experience we’ve gained we have become more mature. We know better what we are doing, so we are enjoying it better.”

Erin Jackson is a favorite in the 500 meters, although she nearly missed out on competing. She slipped at the U.S. trials in this event and didn't make the team, but Brittany Bowe gave up her spot in the 500. Bowe ended up in the event anyway because the U.S. received a third quota spot.

The 500 is supposed to start just before 9 a.m. NBC plans to carry it live, with an encore presentation after the Super Bowl. USA Network will also have coverage of it at 7:30 p.m.

Monobob gives women's bobsledders a second medal event at the Olympics, along with the two-woman competition. U.S. standouts Kaillie Humphries and Elana Meyers Taylor were hoping four-man would be added on the women's side, but many nations lack depth among female bobsledders, so monobob is in the Olympics instead.

NBC plans to show the final monobob run live after the Super Bowl.

Eileen Gu, already an Olympic champion this year in freestyle Big Air, has a chance to win another gold medal in slopestyle. The California native, who competes for China, was the 2021 world champion in that event.

NBC plans to show slopestyle during its late-night coverage.