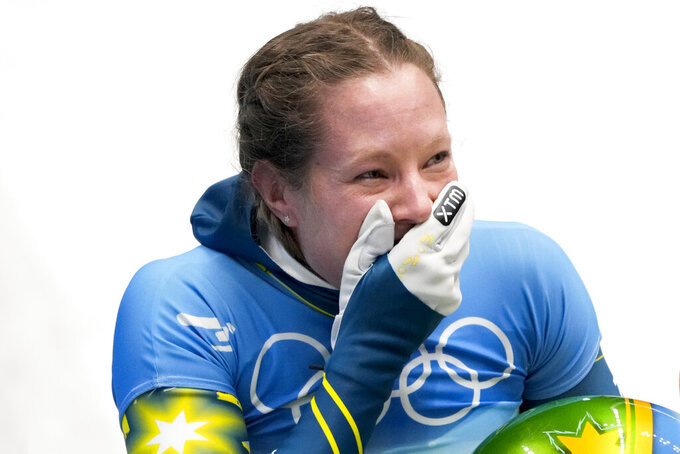 Jaclyn Narracott, of Australia, celebrates winning the silver medal in the women's skeleton at the 2022 Winter Olympics, Saturday, Feb. 12, 2022, in the Yanqing district of Beijing. (AP Photo/Dmitri Lovetsky)

She’s got an Olympic medal now.

And it’s the one that everybody wants.

Skeleton has a new champion, and she was a bit of a surprise winner. Neise, the 21-year-old who won the junior world title last year, became the first German woman to capture the gold medal in Olympic skeleton by rallying in the final two heats at the Beijing Games on Saturday.

“It is mindblowing," Neise said. “I can't realize it right now. I think it'll take some time to realize it. It's an unbelievable feeling."

Her four-run time was 4 minutes, 7.62 seconds. Jaclyn Narracott of Australia — the midpoint leader of the event — won the silver in 4:08.24 and World Cup overall champion Kimberley Bos of the Netherlands took the bronze in 4:08.46.

Neise’s win might have been a bit of a stunner, but at this point, nothing Germany does on this track should be that surprising. After six sliding events at the Beijing Games — four in luge, two in skeleton — the Germans have captured six gold medals.

“It means a lot, especially for skeleton sliders," Neise said. “We haven't had so much medals the past years and we're very proud to represent our country and our federation."

Tina Hermann of Germany was fourth and Mirela Rahneva of Canada, the first-run leader, was fifth.

Neise’s win capped a year that was unpredictable in women’s skeleton from the outset. There were eight World Cup races leading up to the Olympics, with five different winners and 11 different medalists — Neise not being one of them.

But there was a big hint that she could contend at the Olympics. There was a preseason race at the Yanqing Sliding Center after three weeks of international training this fall, and Neise was second in that event.

Clearly, she figured some things out about the new track faster than most everyone else did.

“I knew I could do it if my runs were good," Neise said.

Katie Uhlaender, racing in her fifth Olympics, was the top American and finished sixth in 4:09.23. Uhlaender strained a muscle in her side before competing Saturday and still moved up two spots from where she was after Friday's first two runs of the competition.

“I had a plan today about what I wanted to adjust and I accomplished it,” Uhlaender said. “My push wasn’t where I wanted, but you know. And I was just thinking of all the people that wanted to be here that couldn’t. All the people that came in fourth in an Olympics before and wanted another shot, and I was lucky enough to get that.”

Kelly Curtis, the other U.S. slider in the field, was 21st.

This was the first time in six Olympic women’s skeleton competitions that a woman from Britain didn’t find her way to the podium. Alex Coomber won bronze in 2002, Shelley Rudman won silver in 2006, Amy Williams took gold in 2010, Lizzy Yarnold won gold in both 2014 and 2018 and Laura Deas captured bronze four years ago as well.

Deas was the top British slider in this race, placing 20th.

Narracott’s medal, though, had a very British feel — and that has nothing to do with Queen Elizabeth II remaining the head of state in 15 Commonwealth countries, including Australia. Narracott spends the season traveling and training with the British team, and her husband is retired British skeleton athlete and 2018 Olympic bronze medalist Dom Parsons.

And she has bragging rights in the family now. Parsons won bronze, and Narracott's uncle, Paul Narracott — a Summer and Winter Olympian for Australia in track and bobsled — never medaled at the Games.

Neise was just better. And the world's most accomplished nation in sliding just continues to dominate the Beijing Games.