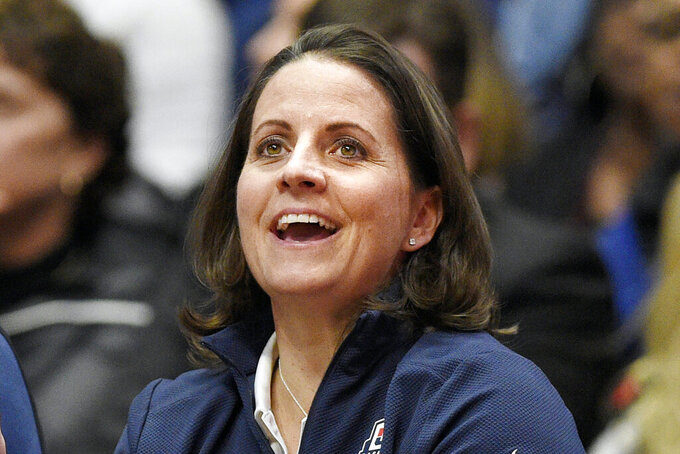 FILE - United States' assistant coach Jennifer Rizzotti watches during the second half of an exhibition basketball game in Hartford, Conn., in this Monday, Jan. 27, 2020, file photo. Rizzotti, who was the point guard on UConn's first national championship team before playing professionally and then embarking on a career as a college basketball coach, has been named president of the WNBA's Connecticut Sun, the team announced Tuesday, April 20, 2021. (AP Photo/Jessica Hill, File)

The former UConn player and longtime college coach was introduced Tuesday by the Sun a week after being named to lead the organization.

She said she plans to juggle her time this summer between the WNBA team's front office and her on-the-court responsibilities with USA Basketball.

Rizzotti was the point guard on UConn’s first national championship team in 1995 and part of two WNBA championships with the Houston Comets. She will be responsible for business operations and marketing strategies for the Sun.

She was fired in March as George Washington's coach after a 9-14 season and one trip to the NCAA Tournament in five years. Before that, she spent 17 seasons at Hartford, winning coach of the year honors in the America East in 2006, 2007 and 2010.

She joins a franchise that got within a game of the WNBA title in 2019 and lost in the semifinals to Las Vegas last season.

Sun coach Curt Miller, who got to know Rizzotti when she was at Hartford and he was coaching Bowling Green, said he's excited to have a former player and coach as the team's president.

“Jen has that lens as a player, so (she) will continue to fight, lead and really, really advocate for our amazing women," he said.

Rizzotti said she's confident the pivot from coaching to the business side won't be difficult.

The Sun open the season on May 14 at Atlanta.