Crabb out (COVID-19), Bourne in for US beach volleyball team 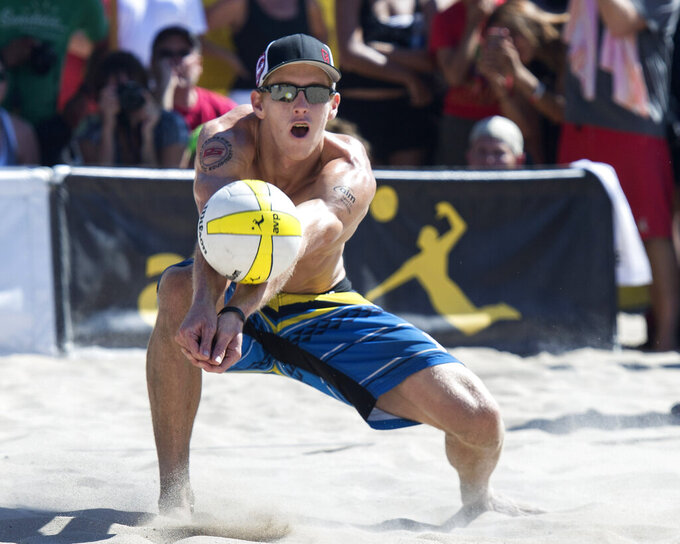 FILE - In this Sept. 21, 2014, file photo, Tri Bourne makes a dig as he and John Hyden played Casey Patterson and Jake Gibb during the AVP Championships beach volleyball match at Huntington Beach, Calif. American beach volleyball player Taylor Crabb is out of the Olympics after several positive COVID-19 tests, and Bourne will take his place as the partner of four-time Olympian Jake Gibb when the competition begins at Tokyo’s Shiokaze Park this weekend. (Kyusung Gong/The Orange County Register, File)

TOKYO (AP) — American beach volleyball player Taylor Crabb is out of the Olympics after four positive COVID-19 tests, and Tri Bourne will take his place as the partner of four-time Olympian Jake Gibb when the competition begins this weekend.

Crabb confirmed his withdrawal on Thursday in a statement to The Associated Press, noting that he was vaccinated and tested negative before he left the United States but tested positive when he arrived in Japan.

“I’m symptom-free, thankfully, but deeply disappointed to not be able to join Jake on the sand and compete as a member of Team USA,” Crabb said. “I want Jake to play in his fourth Olympic games and I want him to bring home a medal. Tri Bourne, an incredible athlete, person and close friend will be competing alongside Jake and filling my spot on Team USA.”

Despite Crabb's positive result at the Tokyo airport and follow-up tests that confirmed it, he remained hopeful that subsequent tests would clear him to play. Those results continued to come back positive — including one on Thursday, just hours before the deadline for the national governing body to replace him on the Olympic roster.

The Olympic beach volleyball tournament begins Saturday at Tokyo’s Shiokaze Park, with Gibb and Bourne scheduled to play their first match on Sunday night against Italy.

“While there is no question that I’m devastated to not be competing, I’ve now taken on a new role — supporting my new team (coach Rich Lambourne), Jake and Tri Bourne,” Crabb, 29, who was looking to make his Olympic debut, told the AP. “I want to send positive vibes and negative test results to all athletes here in Tokyo — stay healthy and enjoy every moment.”

Bourne, a 32-year-old from Hawaii, was on the Southern California team that reached the 2009 NCAA finals in indoor volleyball and was the 2014 rookie of the year on the international beach tour.

He was officially added to the U.S. roster on Thursday, shortly after Crabb texted to let him know that he would be making his Olympic debut.

“It’s truly disappointing to hear that my dear friend will not be playing in the Tokyo Games,” Bourne said in a statement released by USA Volleyball. “Taylor is one of the world’s best and he earned this Olympic spot. ... I’m very honored to be filling in for him and what he represents: his team, family friends and community back home.

“That being said, I’m ready for this moment. I believe it to my core," he said. "Jake Gibb, let’s ball!”

Gibb, 45, is the oldest volleyball player — beach or indoor — in Olympic history. He played in Beijing and London with Sean Rosenthal, finishing fifth each time. With Casey Patterson in Rio de Janeiro, he failed to reach the knockout round of 16.

Crabb and Gibb are the No. 4 team in the FIVB world rankings and finished 11th in the Olympic qualifying points race. Bourne attempted to qualify for the Tokyo Games with Trevor Crabb, Taylor’s brother, but they were the No. 3 U.S. team in Olympic qualifying; there is a quota of two teams per country.

“I’ve faced adversity before, and I will face it again,” Taylor Crabb wrote. “But it doesn’t take the sting out of the situation. I have learned so much from Jake and Rich in the five years we’ve been playing together as a team, and much of that has helped me become a better version of myself — one that my family, friends and teammates can count on. That’s where this hurts the most.”