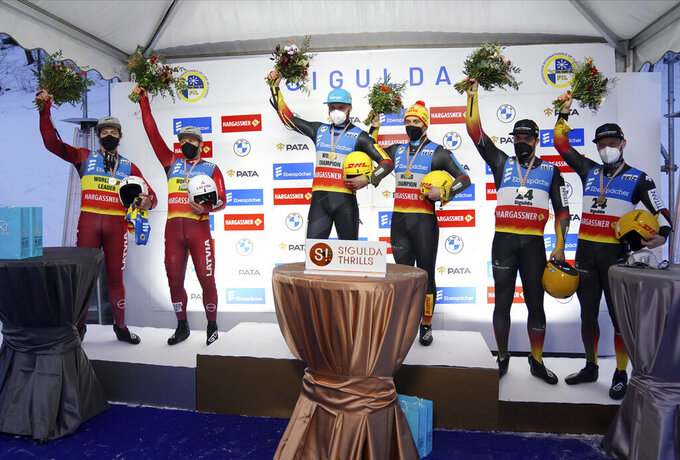 Zack Di Gregorio and Sean Hollander are leaving the World Cup luge circuit in a hurry.

They've got something bigger on their minds.

Di Gregorio and Hollander wrapped up their spot as the doubles sled that USA Luge will send to the Beijing Olympics on Saturday. They'll now skip the final two World Cups of the season to return to Park City, Utah, for two weeks of training before heading out to China for their Olympic debuts.

“The past two days have been surreal," Di Gregorio said from this weekend's World Cup stop in Sigulda, Latvia. “I could not be more excited to be able to represent USA on the biggest stage in the world. Extremely grateful for every single one of my teammates, especially the ones in the doubles field."

Added Hollander: “It’s been a very surreal and stressful past two days."

The U.S. team will be formally nominated on Monday, but for the most part, the luge Olympic roster is now clear — Di Gregorio and Hollander in doubles; Summer Britcher, Emily Sweeney and Ashley Farquharson in women's singles; Tucker West and Jonny Gustafson in men's singles.

Neither he nor USA Luge is sure if he'll make the final cut, and the International Luge Federation — the sport's governing body — said it might not be determined until Monday if the U.S. has qualified three sleds into the men's Olympic field.

If USA Luge qualifies three men’s sleds — and there was some optimism Saturday that the Americans would indeed get three spots — Mazdzer is in. If not, he’s out, which would be doubly devastating to him, since he and Jayson Terdiman didn’t qualify for the Olympics in doubles, either. Terdiman is retiring as a competitor, though he plans to remain with USA Luge in a still-undetermined capacity. Mazdzer has indicated his sliding days are winding down as well.

“It’s been a fun ride,” Mazdzer said at the top of the track, looking toward the camera and speaking literally two or three seconds before starting his second heat on Saturday. “If this is it, love you guys. Thanks for following.”

Gustafson was the top American in the men’s field on Saturday, finishing 21st. West crashed in his first run and did not finish.

The top U.S. sled in Saturday's doubles race was Dana Kellogg and Duncan Segger, who finished 12th — four spots ahead of Di Gregorio and Hollander. But that wasn’t enough to get Kellogg and Segger past them in the Olympic rankings, and, with the U.S. qualifying only one sled for the Beijing Games, that meant Di Gregorio and Hollander got the spot.

“Duncan and Dana have been some of my best friends since I’ve started doing luge, and forever thankful to have them by my side through everything," Di Gregorio said. “So when it comes down to it, the best way I could describe the past two days is extremely thankful because without every single person surrounding me helping me, this dream would’ve never been possible.”

Going to Park City means Di Gregorio and Hollander will be able to get dozens of training runs, far more than they would have gotten if they remained on the World Cup circuit. Plans call for them to be accompanied to Utah by, among others, Terdiman and women’s slider Brittney Arndt, both of whom will help with training.

Mazdzer was 25th in the men’s race. A top-16 finish would have guaranteed he made the Beijing Olympics field.

And now, he waits to see if another Olympic berth is coming his way.

“If this was it, at least I went out my way," Mazdzer said.

Sunday has a women’s race, then sprint races in men’s, women’s and doubles. Kellogg and Segger will compete in the sprint doubles race; if Britcher or Sweeney finish in the top 15 of the women's full-field race Sunday they'll also make the women's sprint field.