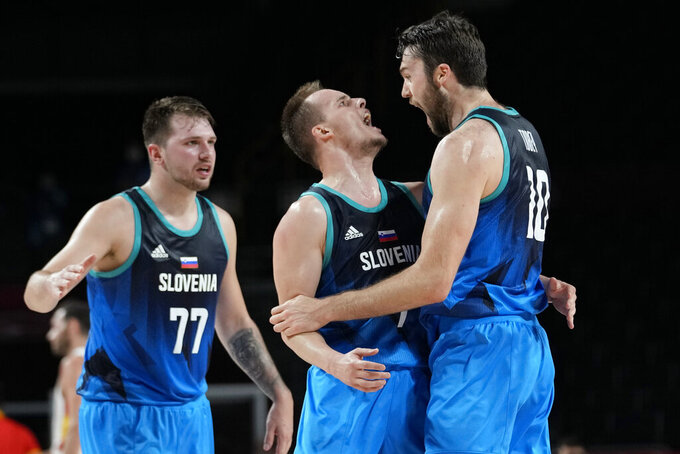 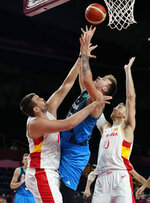 Spain's streak of Olympic medals is in serious jeopardy, with a quarterfinal date with the U.S. looming.

Doncic just missed the first triple-double in the Olympics in nine years and the Slovenians edged Spain 95-87 on Sunday in a tense and important final game of men's group play.

That gave them the top seed from their group and they were drawn to face Germany in the knockout round.

“I think we’re ready for everything,” Doncic said. “It’s the quarterfinals. If you lose you home and we’re going to come out 100 percent.”

Doncic had foul trouble early and shooting struggles all night but finished with 12 points, 14 rebounds and nine assists, one shy of the first triple-double since LeBron James had one for the U.S. in 2012.

More importantly, Doncic got the win, just as he has in all 16 games he's played in competition for the Slovenians.

This victory gave them the top seed from Group C and guaranteed they wouldn't have to play either the U.S., France or Australia on Tuesday.

Spain will play the Americans, putting its streak of three straight Olympic medals in jeopardy. The U.S. beat the Spaniards in classic gold-medal games in 2008 and 2012, then topped them in the semifinals in 2016.

Coach Sergio Scariolo praised his team's “legendary” ability to compete in world basketball and said Spain will be ready.

“We just have to rejuvenate in one day and get ready to compete like we always do,” he said.

Vlatko Cancar scored 22 points for Slovenia. Mike Tobey added 16 points and 14 rebounds as Doncic's teammates kept making plays when Spain forced the ball out of his hands with its zone defenses.

“That shows that we have a great team, amazing team effort,” Slovenia coach Aleksander Sekulic said.

Ricky Rubio scored 18 points for Spain, but missed a 3-pointer that would have tied it at 90 before Slovenia finished it out.

Doncic won all nine games with Slovenia at the 2017 EuroBasket, including a victory over the defending champion Spanish in the semifinals, en route to the country’s first title.

The Slovenians then won four straight in Lithuania last month to win a qualifying tournament and earn a spot in Japan after Doncic joined them shortly after his NBA season with the Dallas Mavericks ended.

Once here, he had opened the Olympics by pouring in 48 points, tied for second-most in the Olympics by a men’s player, against Argentina. He was leading the tournament with 36.5 per game for a Slovenia team that piled up an average of 117 points in its first two.

This was never going to be that kind of game against Spain, the reigning world champions. They stayed in a zone that wouldn't allow him to create much of his own offense, but he figured out how to beat it.

“He showed his class, his mental toughness, his competitiveness, his understanding of what’s was going on,” Scariolo said.

Spain had a six-point lead with 6:22 to play but Slovenia rallied to take the lead for good at 86-85 on Klemen Prepelic’s 3-pointer with 2:43 to play. Tobey dunked on a lob for a three-point edge and the Spanish couldn’t catch up despite numerous chances.

Doncic took just seven shots and made two, never able to gain an offensive rhythm after his early fouls. His first came on the defense end when he banged into Marc Gasol on a collision that drew blood from the Spanish center. The latter two were offensive fouls and he went to the bench just before the end of the first quarter.

Spain couldn’t build much of a lead while he sat the first half of the second quarter and led only 44-41 at the break when Rubio made a 3-pointer with 29 seconds remaining.

The Spanish came out of the locker room with an 11-2 spurt to open a 55-43 lead on the second of Rudy Fernandez’s back-to-back 3-pointers. Slovenia fought through some frustration — two technical fouls were called in the period — to reel off eight straight points and tie it at 68 in the final minute of the period.