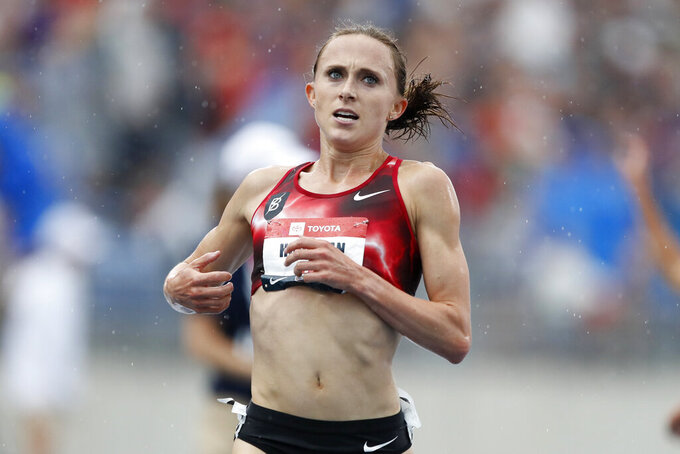 EUGENE, Ore. (AP) — Track and field stumbled back onto center stage this week and found itself in a good, old-fashioned mess.

It involves — what else? — doping. But also burritos. And pork tinged with a performance-enhancing drug. And the suspension of an American record holder who was considered a contender for an Olympic medal that she will not have a chance to win.

The polarizing case of 1,500- and 5,000-meter runner Shelby Houlihan, who received a four-year doping ban only days before U.S. Olympic trials begin Friday, is the latest in a long string of dramas that cut to one of the central weaknesses of the international doping system: It is constantly conflicted between the mission to unwaveringly follow a voluminous and minutiae-laden rulebook and the desire for fairness and common sense.

All the evidence Houlihan and her defenders have offered in a case that has meandered through the system for five months points to the fact that the 28-year-old, who finished 11th in the 5,000 meters at the 2016 Olympics, did not cheat.

Given the 53 doping tests the U.S. Anti-Doping Agency has subjected her to since 2017, none of which came back positive, the best explanation for the five nanograms of the performance enhancer nandrolone that showed up in her system could very well be hers: It came from a pork burrito she bought from a street vendor near her home in Beaverton last December.

But according to the rules in place when Houlihan tested positive (which have been relaxed somewhat, but not in time to help Houlihan), once an athlete tests positive for such a drug, the burden of proof falls on the athlete to show an exculpatory reason the drug entered their system.

Houlihan has a food log showing she ate the burrito on the day in question. She's had hair samples analyzed, and they showed no buildup, the likes of which would be present if she had been consistently using the drug. She's passed a polygraph test in which she says she never knowingly took nandrolone.

None of this was enough for the Athletics Integrity Unit, which oversees track's international antidoping program and has the right to test athletes, or for the Court of Arbitration for Sport, which heard Houlihan's final appeal. Neither would absolve her of responsibility or the minimum four-year ban that comes with the violation. The full details from the CAS decision have not yet been released.

“In my view, what happened to her is entirely unjust,” said Houlihan's attorney. Paul Greene, who has worked many of these cases over the years. “This result is going to live with me for the rest of my career because I know Shelby didn’t do anything wrong and she’s banned.”

The cruelest part of it for Houlihan is that USADA, which conducts most of her testing but was not involved in this case, would almost certainly not have pursued this.

There are similar instances involving tainted meat in which USADA has received tests that show traces of performance enhancers in athletes' systems, done its own investigation and decided to bypass the four-year ban. One case involved U.S. runner Ajee Wilson. Another involved three-time Olympic medalist Will Claye. Another involved 90-year-old cyclist Carl Grove, who was tested because he was a masters record holder.

One key issue is that testing and equipment has gotten so much more precise that trace amounts of performance enhancers that inadvertently slip into meats, or even prescription drugs, can now be found, where five to 10 years ago, they could not.

“Yes, you're responsible for what you take, but no reasonable person would ever think you can’t eat meat or use an otherwise allowable medication,” USADA CEO Travis Tygart said. “A system that punishes those people is not a fair or sustainable system.”

But rules are rules. And in the current climate, in which most of the western world looks warily at Russia and Kenya and several other countries whose antidoping practices are not as well-vetted as those in the U.S., the idea of treating an American differently than any other athlete does not sit well. Many across the globe chafe at being lectured by the U.S., which, for decades, led the world in high-profile and convicted dopers, including Lance Armstrong and Marion Jones.

“I know that no one wants to touch the unspoken elephant in the room ... An undertone that is nevertheless present in our current doping saga discussions,” tweeted Renee Anne Shirley, the former head of the Jamaican antidoping operation who is outspoken about flaws in the system. “Different rules for different folks with an undertone.”

Some portray Houlihan as having done nothing wrong. Others say she's collateral damage in a sport and a system that sometimes eats its own in the service of blind justice. Still others remember how the dramatic improvements in her times raised some eyebrows a few years back.

All that's certain, though, is that Houlihan will be a bystander instead of a favorite when the starting gun goes off in her races over the upcoming two weeks of trials. Her ban will eat up the rest of her prime racing years, from next month in Tokyo, through 2024 at the Olympics in Paris.

“I feel completely devastated, lost, broken, angry, confused and betrayed by the very sport that I loved and poured myself into," she said, “just to see how good I was.”