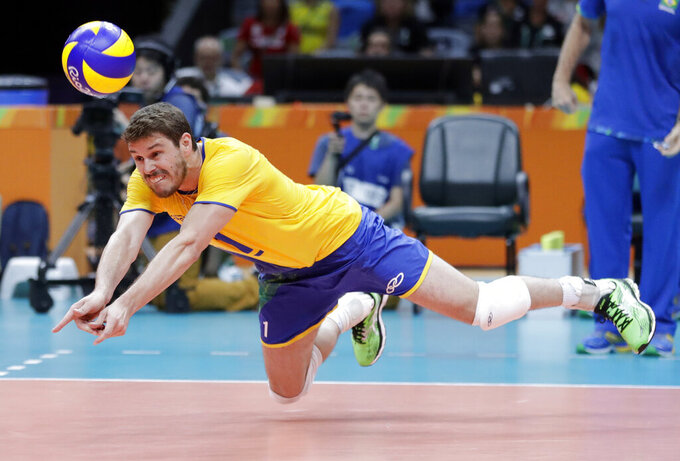 FILE - In this Aug. 9, 2016, file photo, Brazil's Bruno Rezende dives for the ball during a men's preliminary volleyball match against Canada at the Summer Olympics in Rio de Janeiro. Both defending champions in volleyball are in good position to contend for a repeat with Rezende back for a fourth Olympics for the Brazilian men after winning silver in 2008 and ‘12 and gold at home in Rio five years ago. (AP Photo/Jeff Roberson, File) 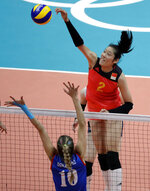 If the past two Olympics have proven anything when it comes to indoor volleyball it's the fact that slow starts are far from detrimental.

Both gold medal teams from the 2016 Olympics in Rio de Janeiro finished fourth in pool play before winning three straight matches in the knockout round to claim gold.

The Brazilian men needed to beat France in their final pool play match just to advance, while the Chinese women lost three of their first five matches before rolling through the medal round.

That was a pattern that was similar to the 2012 Games in London when eventual champions Russia (men) and Brazil (women) won gold after finishing third and fourth, respectively, in pool play.

“The teams that do win have figured out a way to overcome massive adversity, lose a critical match, lose more than one match,” U.S. women's coach Karch Kiraly said. “I don’t know that anybody will get through unscathed. That’s all a part of that process. I don’t know anybody who’s won that event in quite a number of Olympics who didn’t face down some serious adversity.”

That could be the case once again with several legitimate contenders with China, the United States, Italy and Serbia viewed as top contenders on the women's side, and Brazil, Poland, Russia, France and the U.S. the leading contenders for the men.

The draw has presented an extremely challenging Group B on the men's side with four of the top five ranked teams in the world all together with defending champion Brazil, Russia, the United States and France all grouped together, with Poland facing an easier path in Group A.

On the women's side, the No. 1 ranked U.S. women are in the same group as defending champion China, which is ranked second in the world.

Both defending champions are in good position to contend for a repeat with Bruno Rezende back for a fourth Olympics for the Brazilian men after winning silver in 2008 and ‘12 and gold at home in Rio five years ago. He’s joined by Olympic newcomer Alan Souza, who was the MVP of the 2019 World Cup. Brazil is seeking its fourth gold medal to match the combined total for the Soviet Union and Russia.

The Chinese women are also seeking their fourth gold to match the record held by the Soviets with 2016 MVP Zhu Ting back again on the squad coached by Lang Ping, who is the first person to win gold in volleyball as both a player (1984) and coach (2016).

United States middle blocker Foluke Akinradewo Gunderson is back for a third Olympics after a busy stretch since the games in Rio. Those Games had a sour ending for Gunderson, whose knee injury in the first set of the semifinal sidelined her for the rest of the match and contributed to the loss to Serbia. Gunderson got married since then and gave birth to her first child in November 2019 but has used the extra year off to get back into form for these Games.

“I was going to do whatever it took to make that happen,” Gunderson said. “But there were many moments along the way where I just thought maybe it wasn’t for me.”

Both the men’s and women’s teams from the United States overcame crushing losses in the semifinals in Rio to bounce back and win bronze medals two days later. They hope that experience will carry over into these games when the women are seeking their first gold medal ever and the men are looking to get back on top for the first time since 2008.

“It is really hard,” said Matt Anderson, who is competing in his third Olympics for the U.S. “As an athlete, unfortunately in our sport we live ours career in four-year increments. Picturing going for the next Olympics isn’t like, ‘I’ll just play for a couple of more years and see how I feel.’ You have to be in from day one of the quad to be with this team."

Volleyball is returning to its Olympic birthplace with the sport first competing for a medal in the 1964 games in Tokyo. The Soviet Union won the men's competition with host Japan taking the gold for the women.