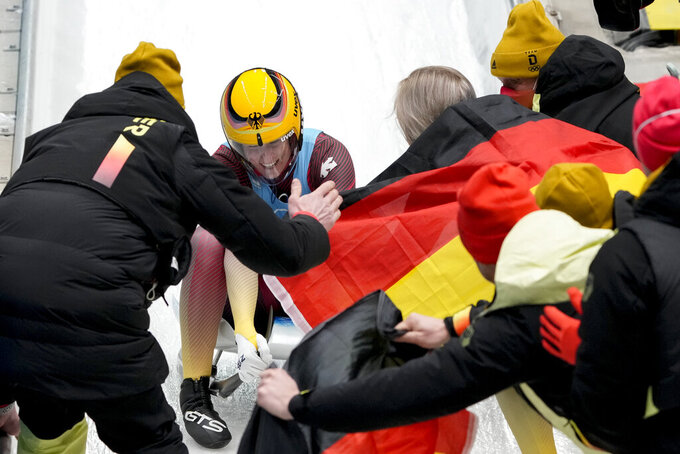 Natalie Geisenberger, of Germany, celebrates with teammates winning the gold medal in luge women's singles at the 2022 Winter Olympics, Tuesday, Feb. 8, 2022, in the Yanqing district of Beijing.(AP Photo/Pavel Golovkin) 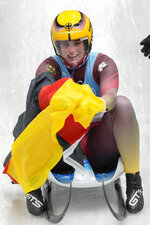 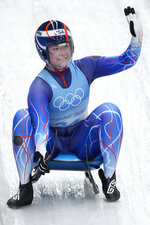 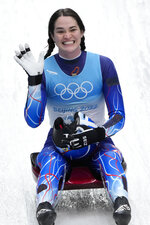 BEIJING (AP) — The greatest of all time.

The GOAT, as the acronym goes.

In most sports, such a title is the source of great debate. Not women’s luge. Definitely not after Tuesday night, when Natalie Geisenberger of Germany became the first to win the Olympic women’s competition three times to cement her place in history as the sport’s best.

“It's hard to compare Olympic medals because every one has its own history," Geisenberger said. “My first was very, very special because it was the first. Now I'm a third-time Olympic champion, but the first time as a mother. It's just great."

Berreiter crossed the finish line in tears when she realized a medal would soon be dangling from her neck. Ivanova was swarmed by happy teammates, some pulling out their phones to record her medal moment.

They were no match for the greatest.

Geisenberger, as has become her Olympic custom, wrapped herself in the German flag after hopping off her sled, unable to fight back tears of joy.

She joins German great Georg Hackl — the men’s champion in 1992, 1994 and 1998 — as the only luge athlete to win three consecutive gold medals in the same event. Add a pair of team relay victories in there and Geisenberger is up to five Olympic golds in her collection, with a sixth possibly coming soon since Germany will be the heavy favorite to prevail when that event is held on Thursday.

Ashley Farquharson was the top American finisher in her Olympic debut, placing 12th and moving up five spots after a brilliant fourth run that could give her some momentum heading into the relay.

“I just wanted to slide my little heart out," Farquharson said. “And I think that's what I did."

Also for the U.S., three-time Olympian Summer Britcher was 23rd and two-time Olympian Emily Sweeney was 26th, both of their chances ruined by crashes during Monday's opening night of the competition.

“Ashley has shown such an incredible breakout performance at these Olympics," Britcher said. “It's been a tough couple of years for everybody and to see her come out, make mistakes in her first run in her first Olympic experience, and come back from that ... she's just getting better each run."

Geisenberger’s lead over Berreiter entering the final heat was 0.330 seconds. That meant all she had to do was put together a clean run — and it was perfect.

And to think this slide almost didn’t happen.

Geisenberger was willing to sit these Olympics out. Her experience competing in China three months ago left her so frustrated, so angry, so disappointed — everything from testing and quarantine rules to even the food, in her mind, was substandard — that she seriously considered skipping the Beijing Games in a bit of protest. It took a number of meetings with German officials, International Luge Federation officials, even International Olympic Committee representatives before she was convinced that the Games would be safe for athletes.

With that, her Leo Plan continued. Geisenberger became a mom midway through this Olympic cycle, taking a year off from sliding to have her son Leo — timing it all with hopes of getting back to top form for the Beijing Games.

“It was pretty hard," Geisenberger said. “My son is my No. 1. I will train as hard as I can when I have time when Leo sleeps. I think we did a pretty good job as a family."

Leo’s got another gold medal to play with now.

And someday, he’ll learn what the rest of the luge world already knows. His mom is the greatest of all time.