Goodbye to greats: Scola, Gasols reach the end at Olympics 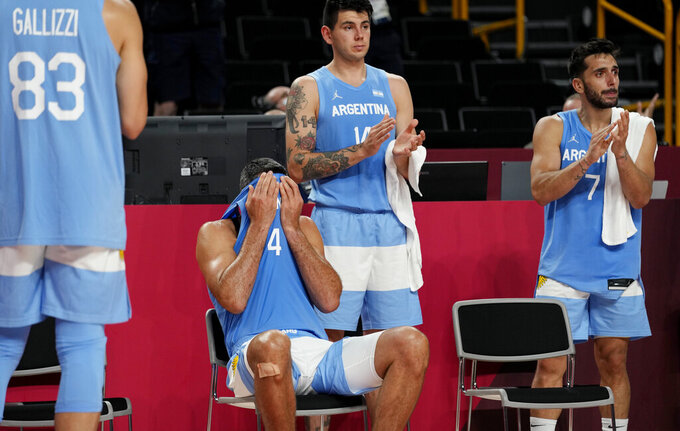 SAITAMA, Japan (AP) — Luis Scola expected to be in the game competing until the buzzer sounded, because that's how he always played.

Instead, his coach took him out in the final minute, triggering a standing ovation and an emotional farewell to one of the greats of the game.

That wasn't the only goodbye Tuesday on a historic day at the Olympics, where the curtain closed on an era of men's basketball.

Scola's apparent final performance for Argentina came hours after Pau and Marc Gasol played together for the last time for Spain, leaving holes to fill for countries who became champions through their brilliance.

He hadn't planned on saying that for sure, even at 41. Scola still loves playing and was still doing it well, averaging 19.7 points through the preliminary round.

But when both teams, the referees and the few people who were in the Saitama Super Arena saluted Scola with a lengthy standing ovation when he went to the bench as Australia was about to finish a 97-59 victory, the message was being delivered for him.

The tough, physical forward began to cry after hugging coach Sergio Hernandez and his teammates, then waved to the people standing.

“When you get that respect from your peers, people that we play against, refs — there were not a lot of people in the court of course because of the situation — but I feel that’s the ultimate recognition,” Scola said. “I kind of felt I got that it in that moment and it was kind of hard for me to keep my composure.”

He walked off the court with the game ball in his hand, finally ready to concede to Father Time.

Pau Gasol was, until Tuesday afternoon.

Like Scola, he tied the men's basketball record by playing in his fifth Olympics. He is the No. 3 men's scorer in the history of the Games, one spot ahead of Scola.

But after a 95-81 loss to the U.S., Gasol confirmed it was his final appearance for Spain and his younger brother strongly indicated he was finished as well.

They leave the Tokyo Games without a medal after Spain won one in the last three Olympics, but there was no sadness from the Spanish.

“No, because we had so many great moments,” Marc Gasol said.

“We had way too many medals. When we started we were never supposed to win that many medals and it started here for me in 2006 in this same arena, so it’s been a hell of a ride.”

Spain won that world championship in the Saitama Super Arena and captured another in 2019. There were also EuroBasket titles in 2009, ‘11 and ’15.

About the only thing the Spanish couldn't accomplish was beating the U.S. They were unbeaten after pool play in 2004 in Pau Gasol's first Olympics, before the Americans eliminated them in the quarterfinals. Argentina went on to win that gold medal, the only one won by a country other than the U.S. since NBA players debuted in 1992.

The U.S. beat Spain again in the 2008 and ‘12 gold-medal games, and the ’16 semifinals. There was one last chance to beat the Americans on Tuesday, but it was clear by then Pau Gasol's time was already passed.

He needed surgery to repair a stress fracture in his left foot and the two-time NBA champion had to work his way back into shape by playing last season in Spain with FC Barcelona.

So even though he was far from the force he had long been and didn't even play after halftime Tuesday, Gasol said his Olympics were already a success.

“And now, this was my last game with the national team, and I’ll have to digest, and figure out, and talk with my family,” Gasol said, "whether it’s worth it for me to continue to play, or should I move on to different challenges and other goals in life?”

Marc Gasol is still under contract with the Lakers and said he intends to return to the NBA next season, but he seems done manning the middle for Spain.

He only played 10 minutes and was scoreless Tuesday. Spain's most effective big man was Willy Hernangomez, while 19-year-old Usman Garuba, a second-round pick last week of the Houston Rockets, also showed promise.

Maybe they can become the inside tandem that the Gasols were.

“They don’t have to become Pau or Marc,” Marc Gasol said. “They have to become themselves and the only way to do that is playing time. and for that to happen the older guys have got to get the hell out of the way.”

It could also be the end for captain Rudy Fernandez, who ended his fifth Olympics by going scoreless.

Just two years ago, Spain beat Argentina to win the Basketball World Cup in China to secure their spots in these Olympics.

But neither country showed it was still the contender it had been during its golden age.

Maybe that's why it was so clear it was time to say goodbye.