Grotheer has big lead at midpoint of Olympic men's skeleton 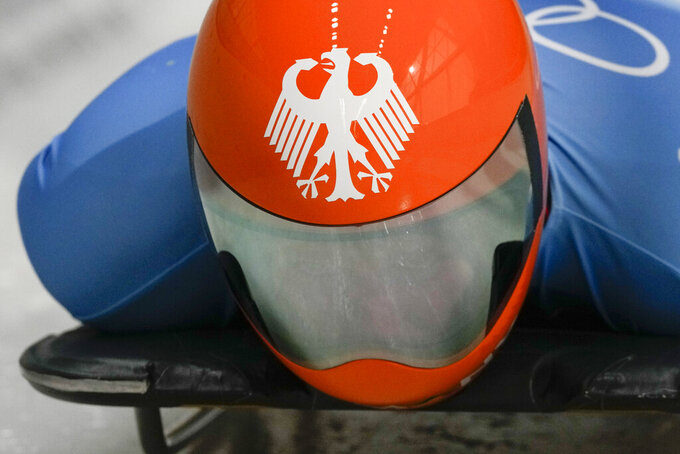 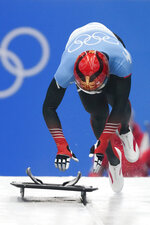 BEIJING (AP) — Martins Dukurs of Latvia and Christopheer Grotheer of Germany have a slight difference of opinion at the midpoint of the men’s skeleton race at the Beijing Olympics.

The standings after two runs suggest Dukurs might be right. Grotheer was the fastest in both heats Thursday at the Yanqing Sliding Center, leading fellow German slider Axel Jungk by seven-tenths of a second going into Friday’s final two slides.

“My big goal is to win a medal,” Grotheer said. “This track is so technical. If you do a mistake in the upper part, seven-tenths (can) go away.”

Dukurs was a bit more succinct when asked if Grotheer can be caught.

Russian sliders Alexander Tretiakov and Evgenly Rukosuev are tied for fourth, 0.87 seconds back of Grotheer. Dukurs — the 11-time World Cup overall champion and 61-time World Cup race winner who still doesn’t have an Olympic gold medal — is sixth, 0.91 seconds off the lead.

The way he sees it, the race is for silver now, with five sleds separated there by 0.21 seconds.

“Two-tenths, it’s nothing, and a lot,” Dukurs said.

Andrew Blaser, the lone American in the field, made his Olympic debut and is 21st after two runs. He’ll need to move up one spot in the third heat to qualify for the fourth run; everyone gets three heats, but only the top 20 move on to the final one.

He woke up about three hours before the race with this thought in mind: “Holy crap, you’re going to the Olympics,” Blaser said.

Racing on his mother’s birthday — the family was watching from the U.S., some relatives wearing shirts with his face emblazoned on them — Blaser said just making the Olympic field felt like victory to him.

“The 70-hour work weeks and training and getting up at the break of dawn and doing all of those things — to me, that’s what made me an Olympian,” Blaser said. “It wasn’t winning a medal here. ... There’s so much more to it than the four minutes of racing. There’s four years of tears and blood and sweat and a lot more tears, hitting walls and the tenacity and the grind. It never stops for us.”

Grotheer set the tone early, his lead of 0.36 seconds after the first run the largest in an Olympic skeleton race since 1928 — when Jennison Heaton of the U.S. led by 1.2 seconds.

And in the second run, Grotheer basically doubled his margin.

“I had a really, really good first day,” Grotheer said. “The first one was brilliant and the second one was also really good.”

Dukurs said the training runs leading up to the competition showed that Grotheer would be the one to catch.

“He’s sliding good, his equipment is running good and training showed he’s one of the favorites,” Dukurs said. “Immediately, I saw his runs and said, ‘He’s No. 1.’”