Hooper delivers for US while family follows along from afar 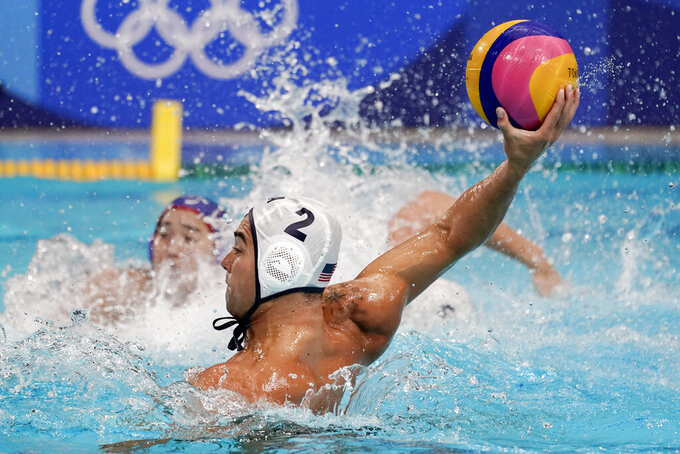 TOKYO (AP) — In the end, it was a celebration for Johnny Hooper's family. Every one of them. His mother, Mimi, and father, Gary. His grandmother, Tomiko Nagatani, so achingly close to her only grandson for once, but kept away by a pandemic.

It wasn't the party they wanted, but they made the most of it.

Returning to his mother's homeland for his Olympic debut, Johnny Hooper had one of the United States' biggest goals in a dramatic 15-13 victory over Japan on Sunday on the first day of the men's water polo tournament at the Tokyo Games.

With the U.S. clinging to a one-goal lead in the final minute, Hooper scored from deep to help close out the win.

It was a sweet moment for the 24-year-old attacker after he failed to make the team for the 2016 Games. But it could have been so much better.

Hooper's family had grand plans for the Tokyo Olympics. His mother was born in Kumakura, and his grandmother lives in Japan. The Tokyo Games were going to be a family reunion of sorts, cheering on Johnny at the Tatsumi Water Polo Centre.

Then the coronavirus hit the world, and spectators were banned from the Olympics. Mimi decided to stay in the U.S., and Johnny's grandmother also had to watch from her home.

While he wasn't able to celebrate with them in person, Hooper had his mother and grandmother on his mind, calling his grandmother his “local fan.”

“Hopefully I'm making her proud,” he said. “And back my home, my mom, she's my everything. She's my biggest supporter. So having big moments like that out (there) today in the game and coming away with the win against Japan here in Tokyo, it's just another step closer to doing better at this tournament.”

Hooper has been building toward the Olympics since his stellar prep career at Harvard-Westlake in Los Angeles. He helped power the University of California to the 2016 NCAA title and finished his collegiate career with a whopping 245 goals.

Seeing Hooper deliver in a key spot in his first game at the Olympics was no surprise for teammate Ben Hallock, who also played with him in high school.

“With the defense they played, the way the play went, he knew that it was going to be him, and he took the shot confidently,” Hallock said. “If you’ve never met Johnny, that’s Johnny. We’re glad he made it.”

Hallock said Hooper has always raved about Tokyo, and he feels for him not being able to have his family in Japan at the Games.

“But we know they are watching,” Hallock said. “We’re his family in the pool, so we’ll do alright.”

Hooper, on the smallish side for major men's water polo at 6-foot-1 and 195 pounds, got to talk to his mom and other family and friends earlier in the day. About two hours before his Olympic debut, he said he went into “dark mode” to get focused.

After all, he didn't want to let his family down — from his teammates in Tokyo to his loved ones watching from afar.

“I love the culture here in Japan. It's kind of full-circle coming back to play in my first Olympics here in Tokyo,” he said, “and it's an honor to represent USA. ... My mom, she supports me and she always has in anything I've (ever) done."

Italy, the reigning world champion, routed South Africa 21-2. Greece edged Hungary 10-9 in the biggest surprise of the first day, and Montenegro rallied for a 15-10 win against Australia. Spain held on for a 13-12 victory against Serbia, which won gold at the 2016 Olympics. Croatia routed Kazakhstan 23-7 in the final game.