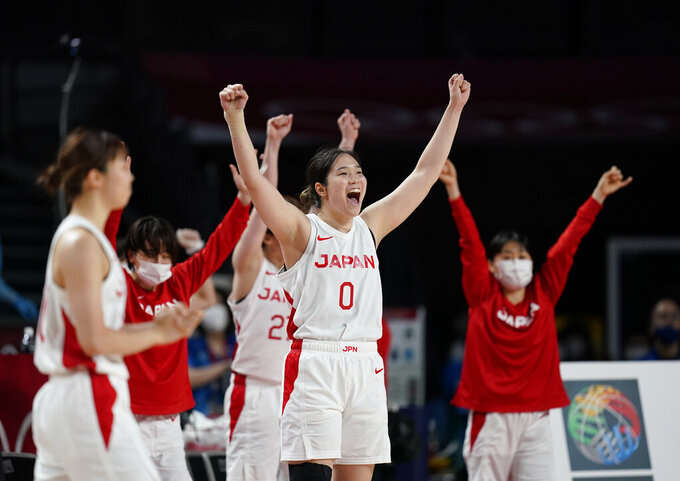 Japan players celebrate their win in the women's basketball preliminary round game against France at the 2020 Summer Olympics, Tuesday, July 27, 2021, in Saitama, Japan. (AP Photo/Charlie Neibergall) 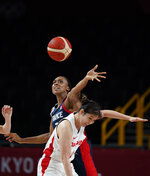 It was a tight game throughout and Japan led 52-49 after three quarters before France quickly tied it at 55 with 6:48 left. The teams then exchanged leads over the next few minutes.

Maki Takada's three-point play with 1:15 left gave Japan a 69-68 lead. Gabby Williams missed a 3-pointer from the top of the key for France, then Nagaoka hit a 3 from the wing with 28.2 seconds left to make it a four-point game.

After a timeout and a couple of fouls, Williams stole the ball at midcourt and scored to bring France within 72-70 with 5.4 seconds left. Hayashi then hit two free throws to seal the win.

Japan is looking for its first Olympic medal, the country's best finish was fifth in 1976. This Japanese team plays an entertaining style to watch with all five players capable of shooting 3-pointers. They make quick cuts to the basket, which creates mismatches for opposing teams that tend to have big centers. It’s different than the way most other traditional Asian teams have played.

Williams, a member of the Los Angeles Sparks, made her Olympic debut. She has been playing for France this summer, including helping the team to a second place finish at the EuroBasket last month. Williams had been suspended for the entire 2021 season by her former WNBA team the Chicago Sky before she was traded to the Sparks.

James Wade, Chicago's coach and general manager, had said the suspension was due to her prioritization of French national team commitments.