The Latest: Spain to take 6 Euro 2020 players to Olympics 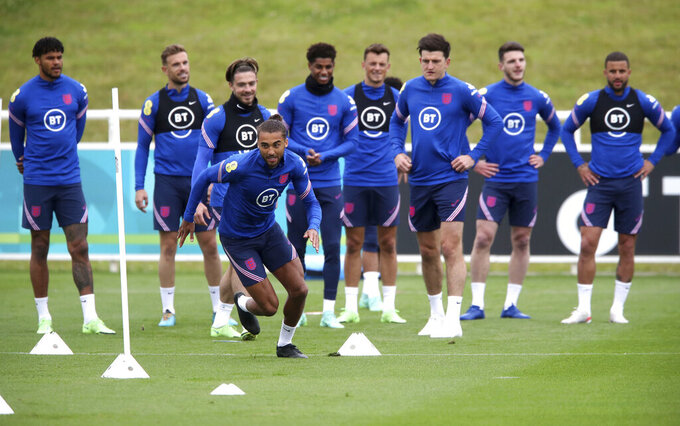 England's Dominic Calvert-Lewin during a training session at St George's Park, Burton upon Trent, England, Saturday June 26, 2021, ahead of their Euro 2020 match against Germany on Tuesday. (Nick Potts/PA via AP)

Spain will take six players from the European Championship squad to the Tokyo Olympics.

Simón, Torres, Olmo and Pedri have been starting for “La Roja” at Euro 2020.

Spain defeated Croatia 5-3 in extra time on Monday to advance to the quarterfinals.

Cristiano Ronaldo has thanked Portugal fans for their support and says the team “will be back stronger.”

The defending champions lost to Belgium 1-0 on Sunday in the round of 16 of the European Championship.

Ronaldo says in an Instagram post that “we didn’t achieve the result we wanted” but “we gave everything” and “are proud of our journey.”

He says the national team is “deeply and sincerely grateful” for the fans for being behind the team “from start to finish.”

He says this team “proved that it can still give a lot of happiness” to the Portuguese people.

Ronaldo finished the tournament with five goals and remains the leading scorer at Euro 2020. He is tied with former Iran striker Ali Daei as the all-time men’s scoring leader in international soccer with 109 goals.

It’ll be the round of 16 at the European Championship this time but there have been some other big ones in the past.

England beat West Germany in extra time in the 1966 World Cup final for the national team’s greatest soccer triumph. But the West Germans won 3-1 in the 1972 European Championship quarterfinals and then won on penalties in the 1996 semifinals.

The match at Wembley is the first one of the day. Sweden will face Ukraine in the late match in Glasgow.