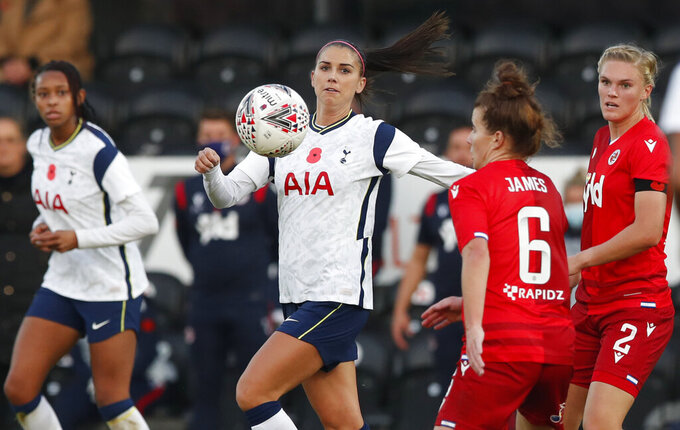 Tottenham Hotspur's Alex Morgan, center vies for the ball with Reading's Angharad James during the English Women's Super League soccer match between Tottenham Hotspur and Reading at the Hive stadium in London Saturday, Nov. 7, 2020. Morgan came on as a 69th minute substitute, the game ended in a 1-1 draw. (AP Photo/Alastair Grant) 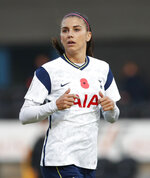 LONDON (AP) — Supported by her baby daughter in the stands, American superstar Alex Morgan made her debut in English soccer on Saturday.

Morgan came on as a substitute in the 69th minute for Tottenham in a 1-1 draw against Reading in the Women’s Super League. She didn't manage to score in her first match in around 15 months, having given birth to Charlie in May.

Charlie was at The Hive Stadium to watch her mom — and was wearing a Tottenham jersey for the occasion.

“It’s fun to look up after the match and see her there supporting me,” Morgan said.

The two-time World Cup winner joined Tottenham in September in a bid to get some game time ahead of playing for the United States at the delayed Tokyo Olympics next year.

She is among a raft of American players to have moved to English soccer for this season, with Rose Lavelle and Sam Mewis at Manchester City, and Tobin Heath and Christen Press at Manchester United.

“It just feels good to get back on the field for the first time in more than a year,” Morgan said. “I just had to get those first minutes and go from there."

“I am hoping,” she added, “to get much more in the next match and the remaining matches of the year, just to keep building, but I think my fitness is getting back there. It’s just going to take a bit of time.”

Morgan acknowledged feeling the pace of what proved to be an end-to-end contest in the final minutes of the game.

“There were definitely a lot more sprints than in training!” she said, laughing. "I will get used to it pretty quickly.

“Once I came on, it was more of a transition game, less position-oriented. So I am looking forward to getting more of the game to settle in a little better, because that end to the match was pretty back and forth.”