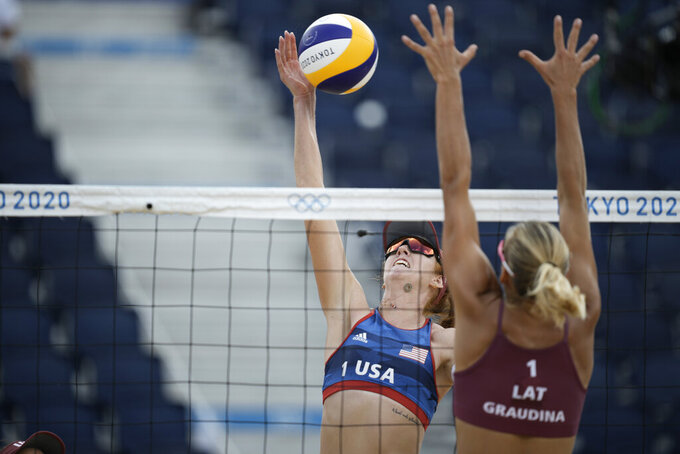 Kelly Claes, left, of the United States, reaches for the ball as Tina Graudina, of Latvia, defends during a women's beach volleyball match at the 2020 Summer Olympics, Monday, July 26, 2021, in Tokyo, Japan. (AP Photo/Felipe Dana)

TOKYO (AP) — Beach volleyball’s future was on display at the Shiokaze Park venue Monday morning for the Olympic debut of Americans Kelly Claes and Sarah Sponcil.

Three of the four players in the U.S. victory over Latvia came up through an NCAA beach volleyball program that has only been around since 2012. Claes and Latvia’s Tina Graudina both went to Southern California, and Sponcil played at rival UCLA. (USC coach Dain Blanton, the 2000 Olympic gold medalist, was courtside working for NBC.)

For previous generations — like the other U.S. women’s team, 39-year-old April Ross and her 31-year-old partner Alix Klineman — college beach volleyball was not an option.

“I think a lot of athletes in the U.S., this younger generation is coming up because of the NCAA, which is super exciting,” Claes said after the three-set victory over her fellow Trojan and Anastasija Kravcenoka. “I’m really excited to see just how the sport grows even more because of that.”

Since beach volleyball was added to the Olympics in 1996, it has been forced to rely on players who switched over after playing indoors in college and perhaps even beyond in European or Brazilian professional leagues. But the varsity beach volleyball program has given Claes, 25, and Sponcil, 24, an option that wasn’t available to their predecessors. (Men still don’t have a college beach program in the U.S.)

The Americans hope that by starting on the beach earlier, they can get back to dominating the sport as they did when Kerri Walsh Jennings and Misty May-Treanor were winning three straight Olympic gold medals. In Rio de Janiero, Walsh Jennings and Ross took bronze for the only American medal — the worst U.S. haul ever.

“It’s been really cool to see just the pendulum of beach volleyball around the world how it’s kind of shifted,” Claes said. “The U.S. has kind of been at the forefront for so long with Misty and Kerri. And then I think the rest of the world kind of caught up and passed us. With the NCAA, there’s going to be this huge new generation of amazing athletes. And I think we’re going to make that kind of push back.”

Sponcil said that when she was growing up in Phoenix, younger girls would compete indoors in school and maybe have a chance to play on the beach only in the summer. There were no beach volleyball clubs in the area; now there are 10 or more.

“The girls are starting a lot younger. It’s crazy,” she said. “And people are just choosing that as their sport. So it’s really cool that so many girls are going beach from the get-go, and they’re going to be that much better when they get to college and professional.”

Even in Latvia, Graudina felt the pull.

And when she was visiting colleges, it was Claes who hosted her and showed her around. Graudina picked USC and led the Trojans to this year’s national championship; Claes and Sponcil each won back-to-back NCAA titles while in school.

Although they are rivals on football weekends, it was Claes and Sponcil who teamed up for the 21-13, 16-21, 15-11 victory on Monday, scoring the last six points of the third set and winning with a little USC-on-USC crime: a spike from Claes that slammed off Graudina.

“We've lost to them the last two times (on the international tour), so there were lots of vengeful thoughts going into the match," Claes said. “But it was really exciting, a little bit nerve-wracking going into it.”

In other results on Monday, the Japanese women made their debut after earning a victory in their first match because of positive COVID-19 tests on the Czech team. The hosts lost to defending champion Laura Ludwig of Germany and her partner, Margareta Kozuch.

On the men's side, Czechs Ondrej Perusic and David Schweiner forfeited because of coronavirus protocols; both Russian teams won, beating Mexico and Australia; and Norway beat Spain.