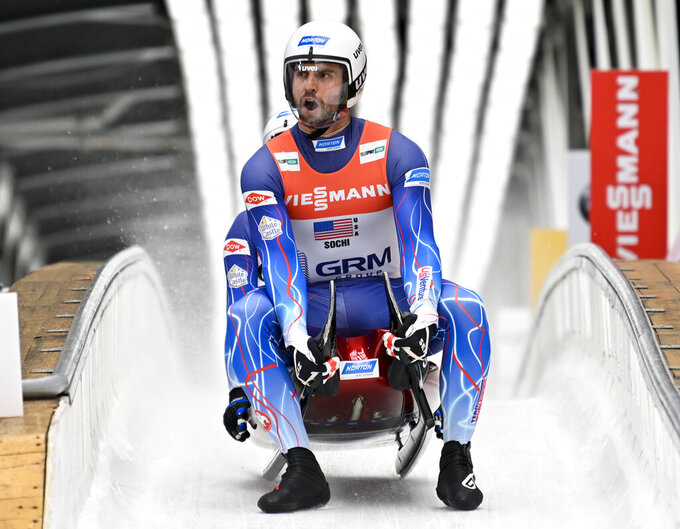 FILE - Chris Mazdzer, front, and Jayson Terdiman of the United States finish their team relay race at the World Luge Championships in Krasnaya Polyana, near the Black Sea resort of Sochi, southern Russia, in this Sunday, Feb. 16, 2020, file photo. Reigning Olympic luge silver medalist Chris Mazdzer of the U.S. said Thursday, Sept. 30, 2021, that he broke his right foot during a preseason training run, and will need some time before figuring out a new plan to get ready for this winter's Beijing Games. (AP Photo/Artur Lebedev, File)

Reigning Olympic luge silver medalist Chris Mazdzer of the U.S. said Thursday that he broke his right foot during a preseason training run and will need some time before figuring out a new plan to get ready for this winter's Beijing Games.

Mazdzer got hurt on the 2014 Olympic track in Krasnaya Polyana, Russia, where some members of the USA Luge national team had gathered to start on-ice work for the season. Mazdzer didn't crash but said his foot struck a piece of the ice while he was going around 75 mph.

“I knew something was wrong right away since I couldn’t put any pressure on my foot, and imaging confirmed that I broke my foot in a few places," Mazdzer said Thursday. “After investing physically, mentally and financially for this Olympic year, the game plan changed in just the matter of a few seconds."

It's the latest blow for the U.S. sliding programs going into the Olympic season.

Reigning women's world bobsled champion Kaillie Humphries — who would be the favorite for two golds in Beijing — still isn't sure if she will be allowed to compete at the Olympics because she is not yet an American citizen. She is entering her third season on the U.S. national team but will need either a U.S. passport or special permission from the International Olympic Committee in order to represent the Americans in Beijing.

Some members of the U.S. bobsled and skeleton teams leave for China on Friday for several weeks of training and test competitions at the newly built track for the Beijing Games. Most of the world's sliders have yet to see that facility.

USA Luge, meanwhile, is scheduled to go to China later this fall and opted to begin training in Russia. Now, Mazdzer is headed home, as is his doubles partner Jayson Terdiman. Mazdzer is the lone luge athlete at the World Cup level who has been competing in both singles — the discipline where he won the silver medal at the 2018 Pyeongchang Games — and doubles in recent years.

“Now it’s time to head back stateside to assess what needs to happen in order to get back on the sled as soon as possible," Mazdzer said.

It's not unheard-of for luge athletes to compete with a broken foot. Former USA Luge women's slider Kate Hansen broke a foot early in the 2014 Olympic season, then went on to qualify and compete in the Sochi Games and finished 10th.

“Over the last three years, we have overcome numerous injuries and still come back stronger,” Terdiman said. “I believe this instance will be no different. Chris and I are both mentally tough, and we know how to get through anything. ... Neither of us has been deterred from the end goal, putting Team USA on the podium in Beijing.”