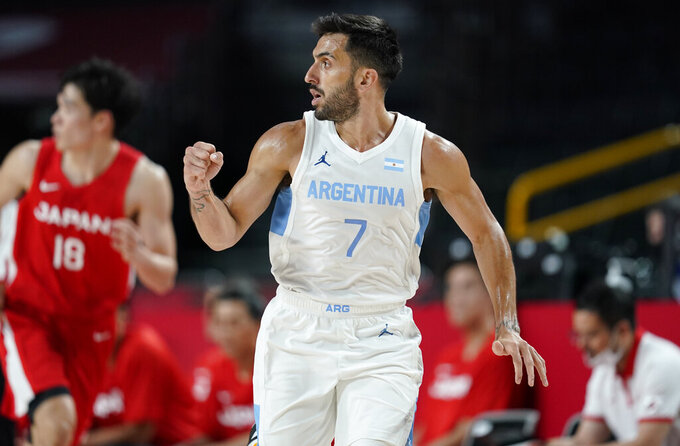 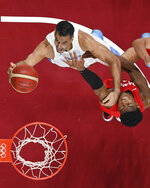 SAITAMA, Japan (AP) — The tradition continues. Luis Scola goes to the Olympics, and Argentina goes to the quarterfinals.

Scola’s fifth Olympics aren’t over yet. He scored 23 points, Facundo Campazzo added 17 points and 11 assists, and Argentina defeated host Japan 97-77 on Sunday in what amounted to a play-in game for a berth in Tuesday’s quarterfinals.

Scola is the fourth men's player to be assured of playing for team that finished eighth or better in five different Olympics, joining Australia's Andrew Gaze and the Spain duo of Pau Gasol and Rudy Fernandez. There are three women who have made the quarterfinals in five Olympics, all from the U.S. — Teresa Edwards, Sue Bird and Diana Taurasi.

“He's ridiculous," Argentina coach Sergio Hernandez said of Scola. “He's 41 years old and yes, I know. He's a hard worker. He don't stop. Never. I don't think he's stopped one day in the last 25 years, including when the season finishes. The day after, he's working, he's doing something. ... I love him."

It’s the fifth consecutive quarterfinals trip for Argentina, all of them coming with Scola — now 41 years old — wearing the national colors. Argentina won gold at Athens in 2004, bronze at Beijing in 2008, finished fourth at London in 2012 and eighth at Rio de Janeiro in 2016.

“Amazing," Campazzo said of Scola. “He's a hell of a player. He's a wonderful example of life and basketball. We have to be thankful to have him. He teaches you a lot. He doesn't need to tell you. You see him in the gym, working out, talking with the press. He's teaching you."

Gabriel Deck scored 16 points and Marcos Delia added 14 for Argentina (1-2), which finds out later Sunday who it’ll meet in the knockout stage.

Yudai Baba scored 18 for Japan (0-3), which would have advanced with a win but ended up as the first home team to go winless in an Olympic men’s tournament since Finland lost all three of its contests at the 1952 Helsinki Games.

Yuta Watanabe scored 17, Rui Hachimura and Makoto Hiejima each scored 13 and Daiki Tanaka scored 10 for Japan. The team stayed in its seats for a few moments after the game, some of them slumped over, hiding their eyes behind towels as they dealt with the disappointment.

“We lost three times, in our home, on our home court," Hachimura said. “We did everything we could do. We've got to get better."

Campazzo also had seven rebounds, the near triple-double flirting with with Olympic history. There have been only two known triple-doubles in men’s Olympic play — one by Alexander Belov of the Soviet Union in 1976, the other by LeBron James for the U.S. at the 2012 London Games.