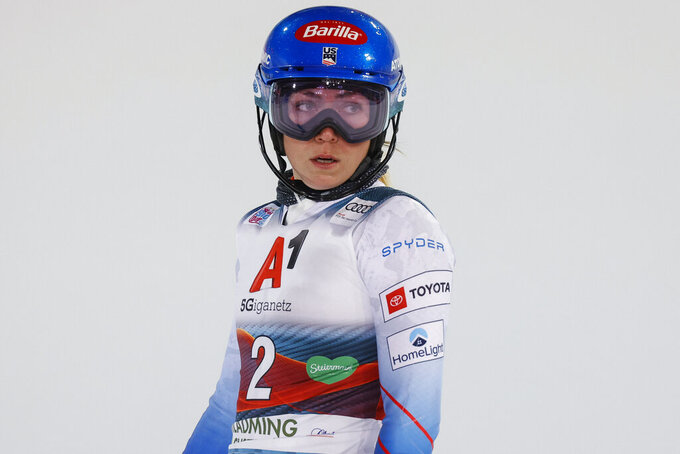 There are nine first-time Olympians on the roster, which still awaits confirmation from the U.S. Olympic and Paralympic Committee.

Shiffrin is currently in first place in the overall World Cup standings, no lower than fifth in the standings for any individual event and is heading to her third Olympics. She already owns three medals, including golds in slalom in 2014 and in giant slalom in 2018.

One noteworthy absence from the team this time is Steven Nyman, who turns 40 on Feb. 12 and was hoping to attend his fourth Winter Games. He complained recently that new rules meant to provide gender equity and make room for racers from smaller countries would keep him out.

The International Olympic Committee reduced the total number of athletes in Alpine skiing from 320 in Pyeongchang four years ago to 306 in Beijing, and there will be up to 153 men and 153 women. Each nation can have a maximum of 11 athletes per gender, down from 14 in previous Olympics. Based on the qualification standards, and the cap on the overall number of male racers, the 2022 U.S. squad was allowed to include as many as 11 women and six men.

Tommy Ford, who hasn't competed on the World Cup circuit since a crash in a race in January 2021, was able to petition for a spot and was among Friday's nominees for the U.S. Ford was on the team for the 2010 and 2018 Games.

Other Americans who previously made Olympic teams and are back are Breezy Johnson, Tricia Mangan, Jackie Wiles, Bryce Bennett, Ryan Cochran-Siegle and Travis Ganong.

Johnson ranks second in the World Cup downhill standings after finishing as the runner-up to reigning Olympic gold medalist Sofia Goggia of Italy in each of the season's first three races in that event. Johnson fell during a training session in Cortina d'Ampezzo, Italy, on Friday and was removed from the start list for Saturday’s race.

In January 2021, Cochran-Siegle broke his neck in a crash in Kitzbühel, Austria, wasn’t back on skis until May and didn’t resume full training until August.

The Alpine schedule in Beijing starts Feb. 6 with the men’s downhill, followed by the women’s giant slalom on Feb. 7.