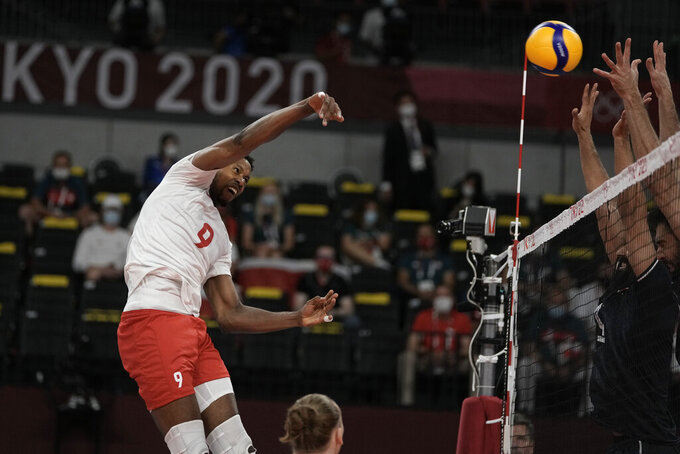 Poland's Wilfredo Leon Venero spikes a ball during a men's volleyball preliminary round pool A match against Iran, at the 2020 Summer Olympics, Saturday, July 24, 2021, in Tokyo, Japan. (AP Photo/Manu Fernandez)

TOKYO (AP) — Volleyball has always been a family affair for U.S. stars Kawika and Erik Shoji.

The sons of legendary University of Hawaii women's coach Dave Shoji have put together impressive playing careers of their own at Stanford and for the United States as they began their second Olympic Games on Saturday night against France.

Playing in their ancestral homeland of Japan has provided the Shoji brothers the opportunity to highlight other members of their family, most notably their late grandparents, who met and got married at an internment camp before their grandfather fought in the 442nd Infantry Regiment for the U.S. in World War II.

“It means a lot to us,” Erik Shoji said. “It’s a point of pride for us, for our family to continue to tell that story. Most people don’t know the story of the 442 and even Japanese internment. I think it will be cool to shed some light on that.”

The story of Kobe and Chizuko Shoji is part of one of the more troubling moments of U.S. history. They grew up about 15 miles apart in Southern California, but didn't meet until some darker circumstances after the start of World War II.

Shortly after the bombing of Pearl Harbor on Dec. 7, 1941, President Franklin D. Roosevelt signed Executive Order 9066 that placed more than 100,000 West Coast residents of Japanese descent into internment camps. Even though the majority were American citizens, they still were essentially incarcerated out of misplaced fear that they would side with the Japanese in World War II.

It took decades for the U.S. government to apologize for the actions with President Ronald Reagan signing a law that gave compensation to survivors of the camps in 1988 and President Bill Clinton sent an apology to them for “racial prejudice, wartime hysteria, and a lack of political leadership.”

Kobe and Shizuko Shoji met at one of those camps in Poston, Arizona.

“I remember a funny story that my grandma used to tell us about how the boys would go out and play football and baseball and the girls would sit there and watch,” Erik Shoji said. “My grandma told us that she would watch my grandpa play and she knew that she had a crush on him and wanted to get to know him.”

They met and got married before Kobe went off to fight in World War II a part of the 442nd Infantry Regiment.

The unit was comprised almost entirely of second-generation American soldiers of Japanese descent who fought in Europe during World War II.

While many of the soldiers such as Kobe Shoji had spent time in internment camps or had family members still there, they still were willing to fight for their country and became one of the most decorated units in the war for the U.S.

Kawika Shoji remembers seeing his grandfather's Purple Heart and Bronze Star when he was a young kid and learning about his time in the war.

“It really is an amazing, fascinating, untold story just about loyalty and heroes,” Kawika Shoji said. “I just remember he would just tell me he wanted to prove his loyalty to our country, and that’s why he signed up for the war. And gosh, hearing that story at a young age and just realizing and understanding his selflessness and perseverance through that time was super inspiring. It says a lot about his character and also the other people that he went to war with as well.”

The Shoji brothers have represented their country through sports not military service, helping the U.S. win the bronze medal in 2016 in Rio de Janeiro and coming back for a second Olympics in Japan.

That provides extra motivation because of the family ties even if they don't know of any family members still in the country.

Their grandparents were huge sports fans when they were still alive and went to as many of Kawika's and Erik's matches as they could. They still provide inspiration today.

“I think they would just be over the moon to know that we are going to our second Olympics,” Erik Shoji said. “Unfortunately, they can’t watch, but we know they are watching it in a certain sense. I know they would be so proud of us. We’re happy to kind of tell their story and let people know where our family came from.”

The U.S. opened play in Pool B on Saturday night by sweeping past France in three sets with Erik Shoji excelling as a libero digging out balls to help his teammates up front.

The match of the day preceded that one when medal favorite Poland fell in five sets to Iran. The Iranians made their Olympic debut in 2016 when they made it to the quarterfinals and now have a big win to start this year’s tournament after pulling out the final set 23-21.