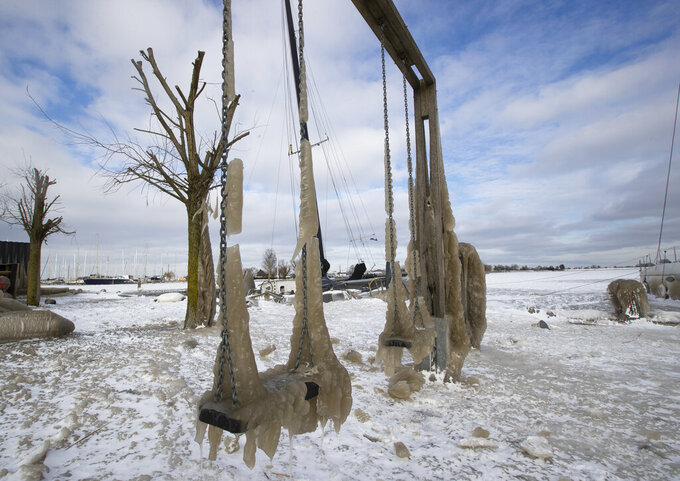 Swings froze after strong winds swept waves ashore in the marina of Monnickendam, Netherlands, Tuesday, Feb. 9, 2021. With freezing temperatures forecast for more than a week in the Netherlands, ice fever is sweeping the nation, offering a welcome respite from grim coronavirus news while also creating a challenge for authorities trying to uphold social distancing measures. (AP Photo/Peter Dejong)

DOORN, Netherlands (AP) — A deep winter freeze gripping the Netherlands is reawakening the national obsession with skating on frozen canals.

People around the country were rummaging through attics and dusting off long-unused skates, while businesses that sharpen skate blades reported boom times.

Ice skating is a national wintertime passion in the Netherlands, with the country's spandex-clad elite athletes dominating Winter Olympic speedskating races in recent years. Amateurs of all ages eagerly await the Arctic conditions that allow them to take to the country's vast network of canals and waterways.

But with the country in a strict coronavirus lockdown, the prospect of a long-distance skating race in the northern province of Friesland being staged for the first time since 1997 remains remote at best.

The association that organizes the 11 Cities Tour over frozen canals and lakes said in January that “under the current coronavirus measures, it is not possible to organize" the near mythical event. Since then, authorities have not relaxed the measures beyond allowing elementary school students back into classrooms this week.

The chairman of the association poured more cold water on people's hopes Tuesday, noting just what a production the race normally involves.

“We're talking about a tour with 1--1.5 million spectators, 25,000 participants, thousands of volunteers and half of the Netherlands on the road,” Wiebe Wieling told national broadcaster NOS. “Every right-thinking person will realize that something like that is not possible” amid the pandemic.

Prime Minister Mark Rutte weighed in on the debate Monday night, saying that skating authorities could consider allowing races on natural ice if the country's top 120 racers enter a coronavirus bubble. But he, too, said that staging an event with a huge numbers of spectators was out of the question, even if it is outdoors.

Still, Rutte said the Dutch should make the most of the conditions while they last.

“Enjoy this beautiful weather and the ice,” Rutte said. “But do that within the COVID-19 rules.”

Dutch media reported a few hardy souls risking a skate on thin ice in parts of the Netherlands on Tuesday, but for the time being temporary ice tracks were the safest place to lace up one's skates.

Local schoolchildren visited the skating club in Doorn, 65 kilometers (40 miles) southeast of Amsterdam, which created its rink by spraying water onto an outdoor inline skating track and built up an even ice surface by dragging a Persian rug around it.

Canals are expected to be frozen solid enough later in the week for people to skate on. Authorities in Amsterdam have closed locks and banned boats on parts of the city's World Heritage-listed ring of canals to give them a better chance of freezing over.

The municipality, however, also warned skaters to stick to social distancing and other coronavirus restrictions.

It was not only ice skating fans preparing for the big chill.

A zoo in the central Netherlands moved 15 penguins indoors and out of the cold Tuesday. Unlike their Antarctic cousins, the black-footed penguins hail from South Africa and Namibia and aren’t used to such icy conditions, Burgers’ Zoo said.

The freezing conditions also created natural ice sculptures in a marina in the village of Monnikendam, just north of Amsterdam on Markermeer Lake, with boats moored there swathed in swirling sheets of ice.

Lines of wind-blown icicles hung off boat railings and ropes, and ice coated a set of children's swings and trees near the edge of the snow-covered frozen waters of the lake.

“We’re living in the most beautiful painting of the 17th century,” Rutte said.

Corder reported from The Hague, Netherlands.