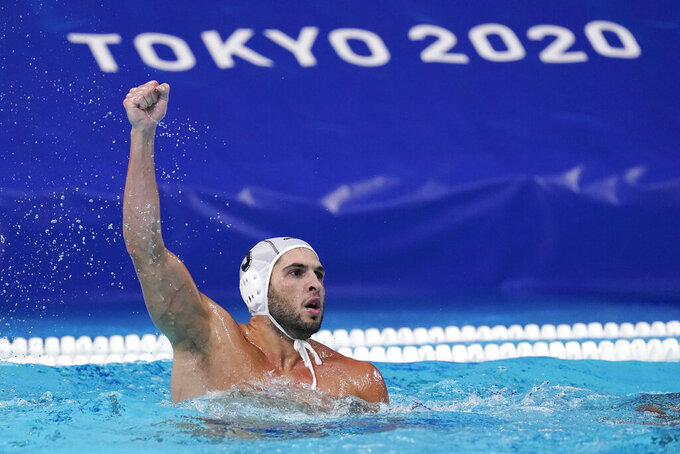 Greece's Ioannis Fountoulis celebrates after scoring a goal against the United States during a preliminary round men's water polo match at the 2020 Summer Olympics, Monday, Aug. 2, 2021, in Tokyo, Japan. (AP Photo/Mark Humphrey)

TOKYO (AP) — Spain goalkeeper Unai Aguirre yelled and splashed toward his bench. He wagged his finger after a couple of saves.

Forget about all the hard-throwing field players in water polo at the Tokyo Olympics. It's all about defense heading into the quarterfinals.

Spain and Greece won their respective groups Monday with a pair of solid defensive performances. Aguirre made 10 saves to lead Spain to an 8-4 victory over Croatia, and Greece rolled to a 14-5 victory against the United States.

Spain allowed a tournament-low 31 goals while going 5-0 in Group B. Greece permitted just 34 goals while going 4-0-1 in Group A. Italy, the only other undefeated team at 3-0-2, yielded the second-fewest goals in group play at 32.

Serbia also won Monday, shutting down Montenegro for a 13-6 victory, and Italy played to a 5-5 draw against Hungary.

The last day of group play finalized the matchups for the quarters on Wednesday. Spain takes on the U.S., and Greece faces Montenegro. Italy-Serbia and Croatia-Hungary are the other two matchups.

“We need to forget these now,” Spain captain Felipe Perrone said. “It's a start from the beginning.”

Led by the excitable Aguirre, who turned 19 on July 14, Spain limited Croatia to one goal in the first half and then turned away every push by the 2012 Olympic champions down the stretch. Alejandro Bustos Sanchez helped put it away with a 6-on-5 goal with 2:41 left.

Spain is aiming for its first medal at the Olympics since it won gold in 1996, and Perrone said its defense is key to the way it wants to play.

“We have a very dynamic game, a lot of movement, so it's very important for us to play good defense that allows us to play that kind of game that we like,” Perrone said.

Greece is going for its first medal at the Olympics. It has come close before, losing to Russia in the bronze medal match in 2004. It finished sixth at the Rio Games.

Greece was among the last teams to secure a spot in Tokyo, finishing second in the qualification tournament in the Netherlands in February. But it looks determined to make the most of its time in Japan.

“We believe in our game and our team,” coach Theodoros Vlachos said.

It sure looks that way, especially with its defense. Greece is the only team in the tournament that hasn't allowed any of its opponents to score in double figures. It yielded just five goals in each of its past two games.

There is nothing complicated about its success, too. The Greeks play together, covering for the rare mistake. And when everything falls apart, Emmanouil Zerdevas has been one of the best goalkeepers in Tokyo.

“Defense is always about concentration and about energy, and I think we brought that in every game and every defensive play,” Genidounias said. “And our goalkeeper has been outstanding. Just like I said before, I hope we bring the same energy and everything that we brought today and in the rest of the group play, I hope we bring it in the quarterfinal.”

The U.S. is struggling heading into the quarters, dropping its last three games in group play after opening with wins over Japan and South Africa. It went 2 for 14 on the power play against Greece after going 5 for 16 with the man advantage during Saturday's 11-8 loss to Hungary.

The U.S. fell behind 4-1 in the first period. Max Irving scored to trim Greece's lead to 6-4 with 5:55 left in the third, but Genidounias converted a penalty shot and then scored again to make it 8-4 with 4:36 remaining in the period.

“I think it starts before the game. It's our preparation for the game,” said Alex Obert, who scored twice for the U.S. “Obviously we didn't have it today, and it showed from the jump.”

In the last two games of group play, Japan beat South Africa 24-9, and Australia cruised to a 15-7 victory over Kazakhstan. All four teams had already been eliminated from contention.