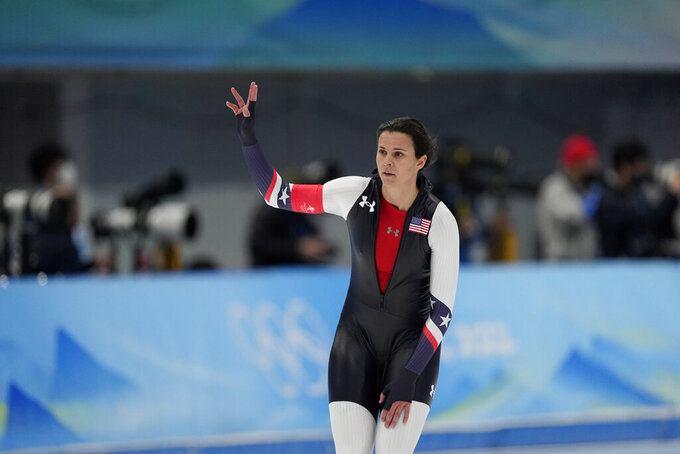 Brittany Bowe of the United States reacts after her heat in the speedskating women's 500-meter race at the 2022 Winter Olympics, Sunday, Feb. 13, 2022, in Beijing. (AP Photo/Ashley Landis)

BEIJING (AP) — Karma was working overtime at the Ice Ribbon.

Miho Takagi claimed a gold medal two days after losing one on the final turn when her older sister fell in team pursuit.

Brittany Bowe took the bronze, which seemed a fitting reward for her generosity toward American teammate Erin Jackson.

“We have a lot to celebrate,” Bowe said.

Takagi won her fourth speedskating medal of the Beijing Games and the first individual gold of the Japanese speedskater's brilliant career with an Olympic-record victory in the women’s 1,000 meters Thursday.

The silver went to Jutta Leerdam of the Netherlands, while Bowe claimed the first individual medal of her career with a third-place showing.

“Obviously Miho put down a phenomenal performance, which was not unexpected,” Bowe said. “She has skated out of her mind this entire competition.”

Takagi added to silver medals in the 500, 1,500 and team pursuit at the Beijing Games — and this one was especially sweet after losing a gold in the team event when her sister Nana lost her balance and crashed into the padding with Japan leading around the final turn.

Nana tried to make light of the crushing result before Miho headed off to the oval for the last of her five events in Beijing.

“I remember what my older sister said to me this morning," Miho Takagi said through a translator. “She said, ‘It’s amazing if you win four silvers.'"

This one was gold.

“Each medal is special to me,” Takagi insisted. “Every single one of them.”

The 27-year-old capped a remarkable display of versatility at these games, which started with a sixth-place showing in the 3,000. She eclipsed her performance from the Pyeongchang Games four years ago, where she took gold in the team pursuit, silver in the 1,500 and bronze in the 1,000.

Leerdam posted a time of 1:13.83 despite dragging her left hand on the ice to stay upright in a turn.

“I had a really big mistake," she said. “I was a little bit sad about that after I came across the finish. But at the end, I can be super happy with a silver.”

Bowe grabbed the bronze in 1:14.61, only 0.1 ahead Russian skater Angelina Golikova and a huge relief for the longtime star of the U.S. program.

Bowe's only medal over three Olympics had been a bronze in the team pursuit at the Pyeongchang Games.

The 2018 Games were especially excruciating for the 33-year-old former inline champion from Ocala, Florida. Bowe had one fourth-place showing and two fifths in her three individual events, missing out on three potential medals by a total of 0.85 seconds.

This time, the clock worked in her favor.

Bowe's medal was the third at the Beijing Games for a much-improved American team — with all three ex-inline skaters from balmy Ocala contributing to the haul. Erin Jackson won the women's 500 meters, and Joey Mantia led a bronze-medal effort in the men's team pursuit.

“For all the Ocala kids to bring home some hardware is really special,” Bowe said.

The U.S. team won only one medal — total — at the last two Winter Olympics.

“So far, three medals,” Bowe said. “I would count that as a huge win for us.”

Bowe was widely lauded before the games for giving up her spot in the 500, an event she won at the U.S. trials, to ensure that Jackson would be able to skate in Beijing.

The gold medal favorite slipped at the trials and finished third, putting her spot on the team in jeopardy. Bowe’s generosity allowed Jackson to begin preparing for the Olympics without the weight of wondering if she’d get a chance to race in her best event.

“I don’t think either of us knew the magnitude of those actions, but very quickly we did realize,” Bowe said. “In times of so much division, to see some positivity on the news and lifting one another up and supporting each other has been really uplifting the past month.”

The Americans wound up with a third spot after the final allocations were made, so Bowe and Jackson both competed in the 500.

Jackson skated to a groundbreaking gold, becoming the first Black woman to win an Olympic speedskating medal, and she was effusive in her praise for Bowe’s gesture.

After a lap, it was clear that Bowe wasn’t going to catch the blistering times of the top two skaters, but she hung on at the end to claim a bronze that almost surely felt like a gold.

“I knew that was going to be a hard time to beat, but when that gun went off, I was going for gold," Bowe said. "I left it all out there.”

A few hours before the race, Jackson — who has already traveled back to the U.S. after her only Olympic event — tweeted words of encouragement to Bowe.

“You are a mentor. A friend. A teammate. A sister," Jackson wrote. “Thank you for playing a huge part in my journey to gold.”