Tennis mixed doubles has its moment at the Olympics 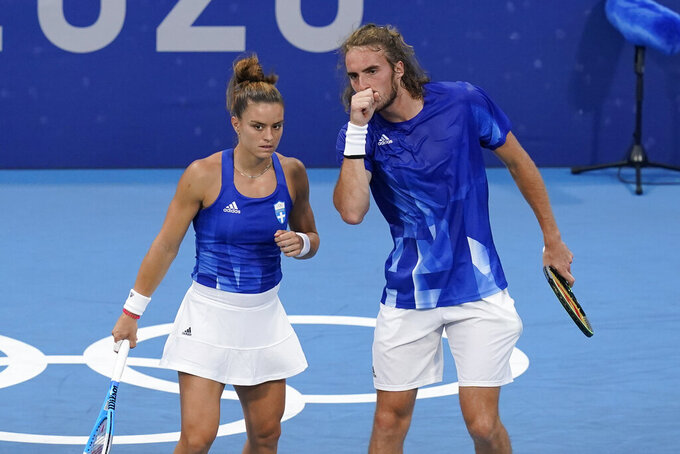 TOKYO (AP) — Novak Djokovic unleashed a scream as if he had just won one of his 20 Grand Slam singles titles.

This being the slightly less prestigious mixed doubles competition at the Tokyo Olympics, Serbian partner Nina Stojanovic broke out into a fit of laughter at Djokovic’s outsized reaction after he served out a first-round win over the Brazilian pair of Luisa Stefani and Marcelo Melo.

The contrast in personalities proved to be a winning formula in Djokovic’s first competitive mixed doubles tournament in 15 years.

The Serbians won their opening two matches in straight sets before losing to the Russian pair of Elena Vesnina and Aslan Karatsev in the semifinals. Then they had to withdraw from the bronze medal match when Djokovic picked up a left shoulder injury during a pair of strenuous singles defeats.

“I’m learning she’s very easygoing on the court,” Djokovic said. “We balance each other.”

Stojanovic, who reached the semifinals at the Australian Open and the quarterfinals at Wimbledon in women’s doubles this year, called it “inspiring” sharing the court with Djokovic.

“I’m just trying to be in the same range as he is on the court — at least with the energy,” Stojanovic said.

With Olympic medals on the line, there’s been some serious star power in the 16-team mixed doubles tournament at Ariake Tennis Park.

Most notably, the top-ranked players in both men’s and women’s singles entered: Djokovic and Ash Barty.

Barty and Australian partner John Peers, who are good family friends, took the bronze medal courtesy of a walkover because of Djokovic’s injury.

In an all-Russian final on Sunday, Vesnina and Karatsev will face Anastasia Pavlyuchenkova and Andrey Rublev.

Barty and Peers beat the high-profile Greek duo of Stefanos Tsitsipas and Maria Sakkari of Greece in the quarterfinals.

While mixed events are now becoming the norm at the Olympics with competitions featuring both sexes in swimming, athletics, archery, judo, shooting, table tennis and triathlon introduced at these Games, tennis mixed doubles has a history at the Games dating back to the start of the previous century.

Charlotte Cooper and Reginald Doherty of Britain won the first mixed doubles gold at the 1900 Games in Paris, with Cooper also winning in singles to become the first woman to win an individual gold medal at the Olympics — in any sport.

“I wish it was promoted more. It speaks volumes for some of the equality issues that we face in today’s world,” said Rajeev Ram, the American who won silver with Venus Williams in 2016. “The other thing is I think a lot of recreational players play it quite a lot, so people that potentially watch tennis can relate to it.”

In 2016, there was an all-American Olympic final that Bethanie Mattek-Sands and Jack Sock won over Williams and Ram.

This time, Mattek-Sands teamed with Ram, a childhood friend from Wisconsin. They lost in the first round.

There was a time when the main tactic in mixed was picking on the woman. Not anymore, or at least not when the woman is a doubles specialist — such as Mattek-Sands, who in addition to Olympic gold has won nine Grand Slam titles between women’s doubles and mixed.

“If they want to pick on me, I’m super pumped because I want someone to pick on me at net,” Mattek-Sands said. “I love it.”

A bigger issue might be how the men sometimes struggle to return women’s serves, which come in at a different pace and from a different angle than they’re used to.

“The girls have quite good sliders and it’s a different ball than we see a lot of the times,” said Ram, who won the mixed title at this year’s Australian Open with Barbora Krejcikova. “There’s two parts to it: one is the different ball and one is the fact that the guy is at the net causing some issues. So if you can manage that game, you usually do pretty well.”

For some teams, though, tactics are an afterthought.

“There was no strategy; there was just a positivity on the court,” Stojanovic said. “We clicked from the start and it was just amazing sharing the court with Novak.”