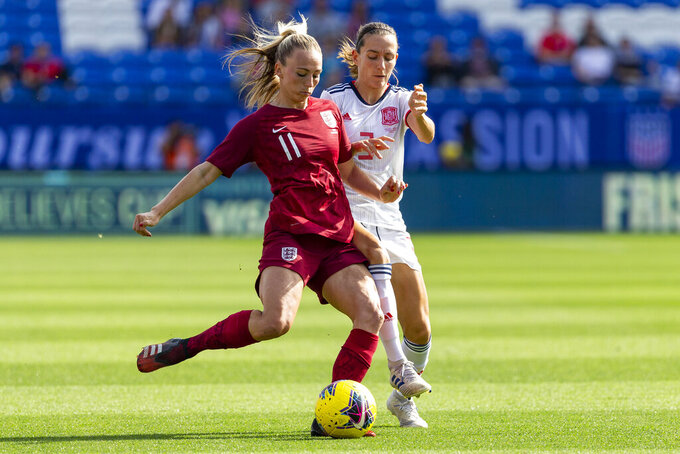 FILE - In this Wednesday, March 11, 2020 file photo, England's Toni Duggan, front, in action during the first half of a SheBelieves Cup soccer match, in Frisco, Texas. England international Toni Duggan has returned to Everton, it was announced Friday, July 9, 2021. She's signed a two-year contract with the club after debuting there in 2007. The 29-year-old forward had spent four seasons in Spain playing for Barcelona and then Atletico Madrid. (AP Photo/Sam Hodde, file)

LIVERPOOL, England (AP) — Toni Duggan returned to Everton on Friday, signing a two-year contract with the club where she made her professional debut.

The 29-year-old forward had spent four seasons in Spain, playing for Barcelona and then Atlético Madrid. She debuted with Everton during the 2007-08 season and joined Manchester City six years later.

A return to the Women’s Super League offers Duggan an opportunity to revive her international career with England. She's not in the British squad for the Tokyo Olympics.

Duggan made her England debut in 2012 and has played in two World Cups. She played in the SheBelieves Cup in 2020 but later that year was dropped by then-coach Phil Neville.

Everton finished fifth in the Women’s Super League last season and hopes to challenge for a Champions League place.

“It would be a dream come true if I can get Everton back in the Champions League,” Duggan said. “That's where this club belongs and I know we can achieve it.”