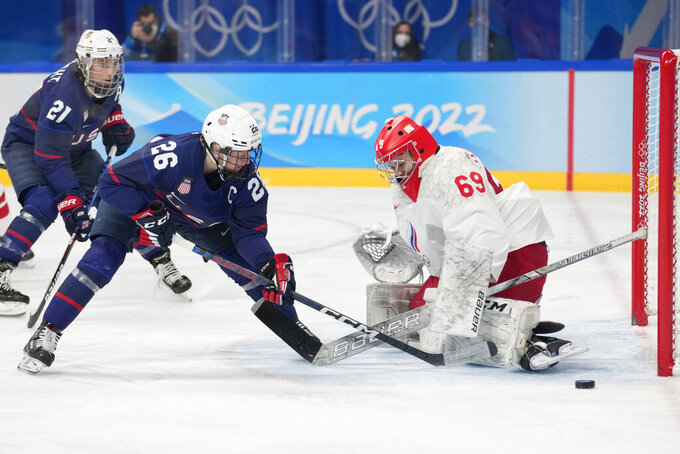 In her second year as a Chicago Blackhawks player development coach, Coyne Schofield is pulling double duty at the Games by checking in on Chicago goalie prospect Drew Commesso, who happens to be playing for the U.S. men’s team.

“My focus, obviously, is first and foremost with this team,” Coyne Schofield said, referring to the defending women’s Olympic champions, who play Finland in the semifinals on Monday. “But I will definitely be watching, cheering from afar and reporting back to some of our folks back in Chicago.”

To be clear, she said, the Blackhawks aren’t requiring her to do anything but focus on playing during her time in Beijing. And yet, Coyne Schofield feels obligated to do her part for the franchise she grew up rooting for, and that made her the team’s first female coach.

Coyne Schofield texted Blackhawks interim general manager Kyle Davidson to say she would be watching the team's prospects at the Olympics.

"He’s like: 'No, don’t worry about it. We got it,‘” she said. “I have their full support. But if I have the opportunity to see them play, I obviously look forward to that.”

There couldn’t have been anything bad with her first report back after Commesso — the youngest goaltender to play for the U.S. at the Olympics — stopped 29 shots in a tournament-opening 8-0 win over China on Thursday. The 19-year-old is in his sophomore season at Boston University after being selected by Chicago in the second round, 46th overall, of the 2020 draft.

“She’s been really awesome to me,” Commesso said.

“I’m a big fan of hers,” he added. “I’ve been watching her play in this tournament, and hopefully we’ll stay in touch. And hopefully, I can get a signed stick or something from her because she’s a legend in women’s hockey.”

It helps, too, that Commesso’s professional connection to the three-time Olympian allows him to get advice on how to prepare for his first Winter Games experience.

“That aspect of it is pretty cool, because she knows what it’s like to play on a stage like this,” he said. “She’s been a great tool for me. And I’m going to continue to use her for help and reach out when I need it.”

Commesso missed out on his opportunity to represent the U.S. at the world junior championships, which were abruptly canceled over COVID-19 concerns shortly after they began two months ago. And yet, if not for the omicron surge, which led to the NHL’s decision to not participate in the Olympics, Commesso wouldn’t have had the chance to play for the U.S.

He left BU with a 12-8-3 record this season to play for a youth-laden U.S. men’s team that's off to a 2-0 start. The Americans play Germany on Sunday night, with a chance to clinch the top seed and advance to the quarterfinal round.

Coyne Schofield has three goals and two assists in five games for the U.S. women. She scored an empty-netter and set up Hilary Knight’s tying goal in the second period of a 4-1 quarterfinal win over the Czech Republic on Friday.

Aside from playing and scouting, Coyne Schofield is also active in the Professional Women’s Hockey Players Association’s campaign to establish a economically sustainable women’s league in North America.

“It’ll slow down at some point in life, right?” she said of all the jobs she’s juggling. “To be part of the change that we’re seeing in women’s hockey and women’s sports is extremely important to me. And if I can be a part of that change, it’s a role and an honor that I want to fulfill every day that I can.”

The job with the Blackhawks does provide her a glimpse at a career whenever she is finished playing.

“I’m enjoying where I’m at right now,” said Coyne Schofield, who turns 30 in May. “I’m just so thankful for the support I’ve received from the Blackhawks to continue to play while being a full-time employee, especially this year because I haven’t been able to give as much focus to them as I did last year.”

The least she could do was provide Commesso a few tips.

“Before he got here, he’s asking some packing questions as most Olympians have,” Coyne Schofield said. “And it’s basically just bring your underwear because you get so many clothes here.”