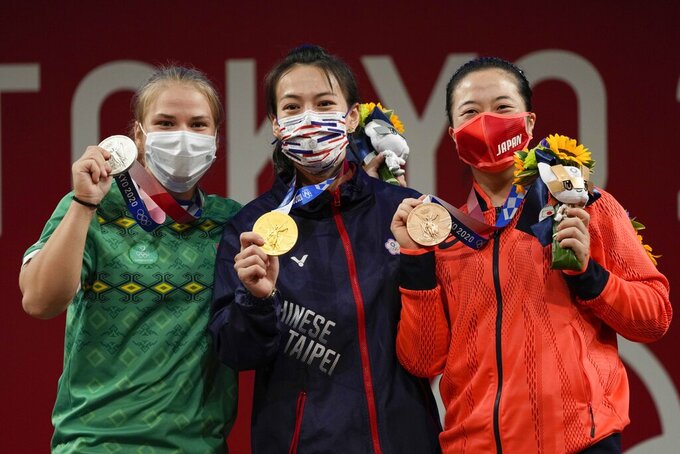 TOKYO (AP) — Sparsely populated and isolated from most of the outside world, Turkmenistan has finally won its first Olympic medal since independence from the Soviet Union.

Weightlifter Polina Guryeva won a silver medal for the Central Asian nation at the Tokyo Games on Tuesday, and then predicted she would go down in the country’s history.

Guryeva, who calls Kuo her “idol” and copies her training exercises, finished in 28th place at the 2019 world championships while competing one weight category higher. On her coach’s advice, she used the one-year Olympic delay caused by the coronavirus pandemic to reset, dropping down a class.

“When the pandemic began, I didn’t have a chance of qualifying,” she said. “In October, I dropped down and started training. And I went to the Asian Championships in Uzbekistan, lifted 211 total, and then I got the chance to go to the Olympics. And then I started training even harder to get this medal.”

Guryeva will return home to a country which has often had little contact with the outside world but is trying to make its name in the world of sports. The gas-rich nation sent two medalists to the Soviet Union’s Olympic teams for the 1956 and 1960 Games but success has been rare since.

Hosting the 2018 weightlifting world championships at a lavish new sports complex in the capital, Ashgabat, was one step toward raising the country’s profile. Turkmenistan’s authoritarian president, Gurbanguly Berdymukhamedov, is a fan of cycling and the country was scheduled to hold the track cycling championships this year, too, but they were moved because of the pandemic.

The Turkmenistan government says it has not had any cases of COVID-19 but has made vaccinations mandatory.

For Kuo, the victory was about completing a set of major championship medals. The Taiwanese lifter finally added Olympic gold to her four world titles.

“I have all the pieces together. Now I am very happy,” she said through a translator.

Andoh lifted a total of 214kg for bronze despite what she later revealed was severe pain in her feet. After her last lift, she fell to the ground on stage with a smile and was helped away by her coaches.

In the 64-kilogram category, Maude Charron got hear a song at the Olympics that her “idol” never did — the Canadian national anthem.

Charron won an unusually open competition with six women in the running for a place on the podium ahead of their last lifts. Charron’s total of 236kg was four more than silver medalist Giorgia Bordignon of Italy and six ahead of Chen Wen-Huei of Taiwan.

Christine Girard, the Olympic champion from the 2012 London Games, never got to stand on the top step of the podium while “O Canada” was played because she originally finished in third place. The lifters that finished above her, from Kazakhstan and Russia, both later tested positive for doping.

“I asked her how to prepare for the games, how not to be too intimidated by the rings, and she wrote me a message,” Charron said. "Now I just feel like that’s her medal, that’s her moment because she didn’t have it in real time.”

Weightlifting has reallocated dozens of past Olympic medals and cut the Tokyo allocation for countries which racked up the most doping offenses.

“For sure anti-doping made a great deal in just cleaning the sport," Charron said. "There is a progression in this clean way.”