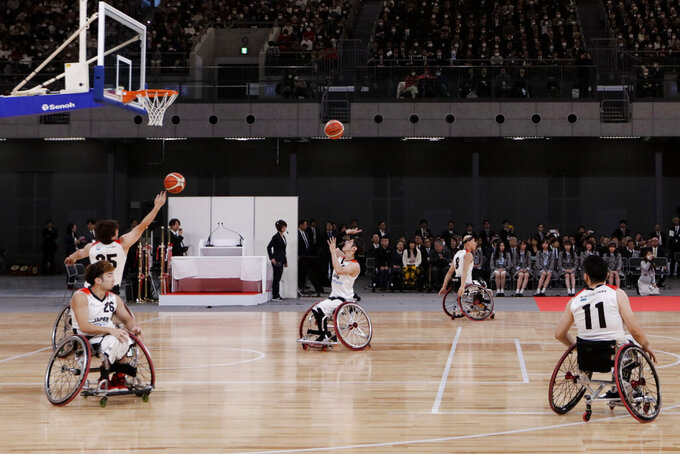 FILE - In this Feb. 2, 2020, file photo, members of Japan's national wheelchair basketball team warm up on the court during a grand opening ceremony of the Ariake Arena, a venue for volleyball at the Tokyo 2020 Olympics and wheelchair basketball during the Paralympic Games, in Tokyo. The opening next week of the Paralympic Games in Tokyo is being used as a stage to launch a human rights movement aimed at the world’s 1.2 billion people with disabilities.(AP Photo/Jae C. Hong, File)

TOKYO (AP) — The opening next week of the Paralympic Games in Tokyo is being used as a stage to launch a human-rights movement aimed at the world’s 1.2 billion people with disabilities.

The IPC is also hooking up in the campaign with other sports bodies including the Special Olympics, the Invictus Games Foundation, and the International Committee of Sports for the Deaf.

Andrew Parsons, president of the IPC, told The Associated Press that “WeThe15” aims to put persons with disabilities on the inclusion agenda along with “ethnicity, gender, and sexual orientation.”

“We have seen other movements like LBGTQ, Black Lives Matter, the Me Too movement, and we need a similar movement for persons with a disability," Parsons said.

"These movements have organized themselves in a way that they could advance their agenda, and we believe that so far — even though the Paralympics has brought some change — we need to bring together these other international organizations to make this change more effective. Not only every four years.”

The launch Thursday features a 90-second campaign film that organizers say will be shown on television channels in 60 countries.

“It's understanding that 1.2 billion people — 15% of the global population -- cannot be ignored,” Parsons said. "They must be included in the society. That’s the message we want to bring and highlight to the world.”

The WHO estimates that of the 15% of the world’s population living with some form of disability, between 110 million and 190 million adults have significant difficulties in functioning.

Organizers will accent the launch by lighting up more than 125 worldwide landmarks in the color purple. Advocates say purple is long associated with the disability community. Included in the lighting will be New York's Empire State Building, Tokyo's Skytree and Rainbow Bridge, Rome's Colosseum, the London Eye, and Niagara Falls spanning Canada and the United States.

“With WeThe15, I hope we unite people through creating understanding,” said Heinrich Popow, a two-time Paralympic gold-medal winner at 100 meters and the long jump. Heinrich piled up seven medals overall in four Paralympics — from 2004 in Athens through 2016 in Rio de Janeiro.

“We want to motivate through WeThe15 with stories,” Popow added. “And create the understanding that we also love life.”

The launch of WeThe15 comes a year after a documentary film on Paralympic athletes was released in almost 200 countries.

The film “Rising Phoenix” weaves the history of the Paralympic Games around athletes’ lives and the financial ups and downs of the movement. It also includes segments about Dr. Ludwig Guttmann, a refugee from Nazi Germany who put together an athletic competition for the disabled in Britain in 1948 as way to help treat World War II veterans with spinal cord injuries.

The Tokyo Paralympics open on Aug. 24 in a ceremony at Tokyo's National Stadium. They will feature about 4,400 athletes, a much smaller contingent that the just-completed Olympics, which featured 11,000 athletes.

The Paralympics close on Sept. 5.

The Paralympics will be held without any fans, even fewer than the Olympics, which allowed some fans in outlying venues. The Paralympics come as new infections have accelerated in Tokyo, which may expose an athlete population that is more vulnerable to COVID-19.

New infections in Tokyo tripled during the 17 days of the Olympics, although medical experts said the surge was not directly linked the Tokyo Games. Rather, experts suggested an indirect effect as the public was distracted and lulled into a false sense of security that staging the Games offered.