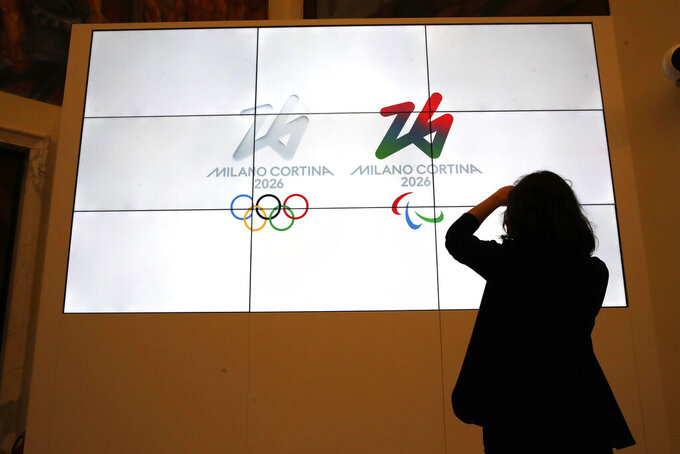 The logo of 2026 Milan-Cortina Olympics and Paralympics, right, are unveiled to the journalists at a press conference in Rome, Tuesday, March 30, 2021. A futuristic white-on-white logo was unveiled as the emblem for the 2026 Milan-Cortina Olympics on Tuesday following an online vote. Nearly a million votes were cast, 871,566 to be exact, over the last two weeks from Italy and 168 other nations for the two finalists. The “Futura” logo received 75 percent of the votes, winning easily ahead of the more traditional “Dado” option. (AP Photo/Alessandra Tarantino)

MILAN (AP) — The International Olympic Committee reluctantly accepted plans to spend 50 million euros ($60 million) to rebuild an abandoned bobsled track in Cortina d’Ampezzo for the 2026 Winter Games — as long as the funds stay out of the official games’ budget.

After the IOC periodic coordination commission's visit on Monday, which was held virtually, the Olympic body said it “again expressed its concerns with regard to the legacy of the track.”

The century-old venue in Cortina was closed 13 years ago for financial reasons but is still a source of pride in the Dolomites resort.

The IOC had suggested that instead of spending heavily to rebuild the Cortina track, that sliding events for the Milan-Cortina Games could instead be contested at a venue in neighboring Switzerland (St. Moritz) or Austria (Igls).

Ever since Russia’s overall spending linked to the 2014 Sochi Olympics topped $50 billion, the IOC has been anxious to curb all infrastructure spending by local organizers. That policy allows for taking events to another country to cut costs.

“It was pointed out that the IOC had made a number of proposals for alternative tracks, none of which were accepted,” the IOC said in a statement.

“On the other hand, the commission took note that the final plans for the venue are not an investment in a sliding track for the Olympic and Paralympic Winter Games but are part of a wider entertainment park project that is completely unrelated to the games. The IOC is therefore not in a position to go any further in this discussion, as this is a sovereign decision of the Veneto region.”

The IOC added the hefty expense “will not form part of the investment budget for the Olympic and Paralympic Games" and “the track will therefore only be (lent) out to the organizing committee for the duration of the games.”

As for the organizing committee’s risky proposition of holding speed skating at an outdoor oval in Baselga di Piné, no decisions were made.

There were recent tests to stage speed skating at Milan’s outdoor Arena Civica, as well as calls to use the indoor oval in Turin that was built for the 2006 Games.

“Discussions are continuing on the speed skating oval,” the IOC said.

The last time speed skating was held outdoors at the Olympics was for the 1992 Albertville Games, with the IOC having since preferred the controlled environment of indoor venues.

High temperatures in Albertville made the track slushy.