The 2024 Paralympics in Paris won't open in stadium 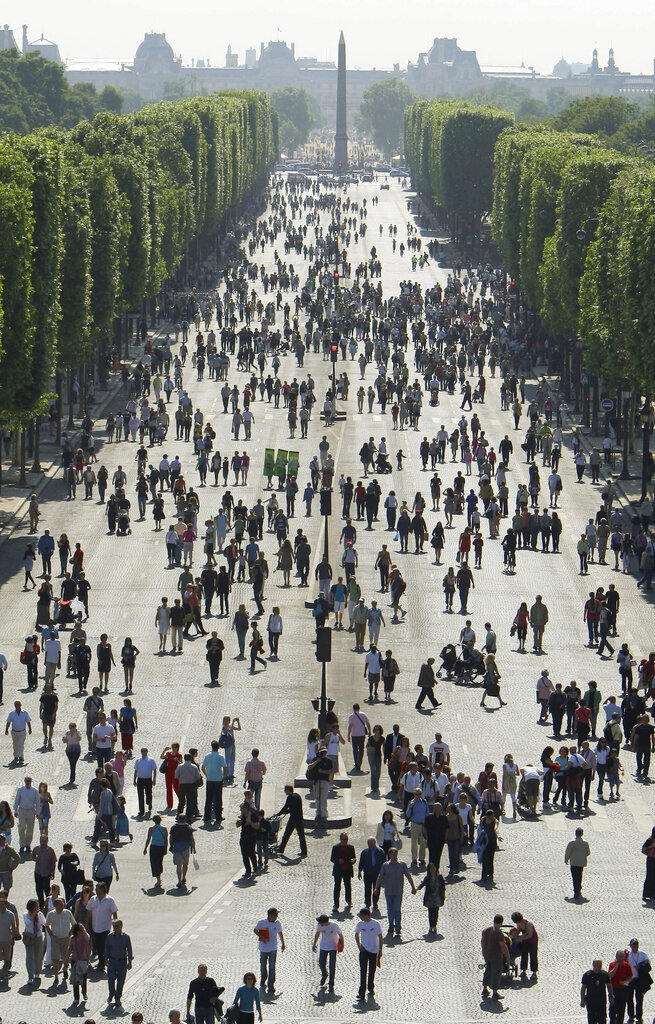 FILE- Visitors walk towards planted fields on the Champs Elysees near the "Place de la Concorde" (Concorde's square) monument in Paris, Sunday, May 23, 2010. Some 4,400 of the world's best athletes, parading down France's most famous boulevard with their prosthetic limbs, mobility chairs and stories of adversities overcome, to a grand celebration of their prowess and sports on the Paris square where the French revolutionaries of 1789 chopped off heads. (AP Photo/Jacques Brinon, File)

PARIS (AP) — The world's best Paralympic athletes, parading down France’s most famous boulevard with their prosthetic limbs, mobility chairs and stories of adversity, heading to a grand celebration of their prowess and sports on the Paris square where the French Revolutionaries of 1789 chopped off heads.

Paris organizers on Thursday announced their opening ceremony plans for the Paralympics, an event with 4,400 athletes that will follow the first post-COVID-19 pandemic Olympics in less than two years.

The attention-grabber is the venue itself: In a first, the Paralympic opening show will be freed from a traditional stadium setting and instead be held in the open in the French capital's heart, on the Champs-Elysées boulevard and the city’s biggest square, Place de la Concorde.

The once blood-soaked plaza, where King Louis XVI, his queen, Marie Antoinette, and other nobles were guillotined during the French Revolution that laid the first foundations of modern France, is shaping up as an eye-catching focal point of the Paris Games.

Set like a gem between the Tuileries Gardens, the Seine River and the majestic Crillon Hotel, the square will be converted into the arena for the new Olympic sport of breakdancing, 3-on-3 basketball, BMX cycling and skateboarding, coming back to the program after its Olympic debut at the pandemic-delayed Tokyo Games in 2021.

Only 17 days after the July 26-Aug. 11 Paris Olympics, the Place de la Concorde will then take center stage for the unprecedented opening ceremony of the Aug. 28-Sept. 8 Paralympics.

International Paralympic Committee president Andrew Parsons predicted a ceremony that will be “a thing of beauty, and a once-in-a-lifetime event that will go down in all our histories.”

“This festival of inclusion all begins with the truly unique experience of thousands of Paralympians parading down the world’s most famous avenue. What an amazing thrill it’s going to be to enter the Champs-Elysées and then make the journey down to Place de la Concorde, all the while being framed by the Arc de Triomphe and the Louvre,” he said in remarks distributed by 2024 organizers.

Organizers said space will be made at the ceremony for 65,000 people — equivalent to the crowd at a large Olympic stadium.

“Going down the Champs-Elysées to Place de la Concorde and sharing this with nearly 65,000 people, in the heart of the capital, will be a historic moment," she said. “It’s unheard of."

About 30,000 of those in attendance will be able to watch the ceremony for free.

The venue choice is part of a massive effort by Paris organizers to free the Olympics and Paralympics from the shackles of traditional sports venues and turn the French capital into a giant playground for sport during the Games, with the Eiffel Tower, Grand Palais and other landmarks used as competition venues.

The concept — encapsulated in the official slogan, “Games Wide Open” — is not without risk. The use of city sites as venues poses security, transport and logistical challenges.

The Olympic opening ceremony will also break with tradition, taking to the waters of the Seine instead of being held in a stadium.

Boats will parade the 10,500 athletes on the waterway from east to west. Organizers are planning for at least 600,000 spectators, most of them ticketless and watching for free, and are billing it as the largest opening ceremony in Olympic history.

The opening and closing ceremonies for both the Olympics and Paralympics will be directed by prize-winning French theater director Thomas Joly.