76ers stripped of 2nd-round picks next 2 years for tampering 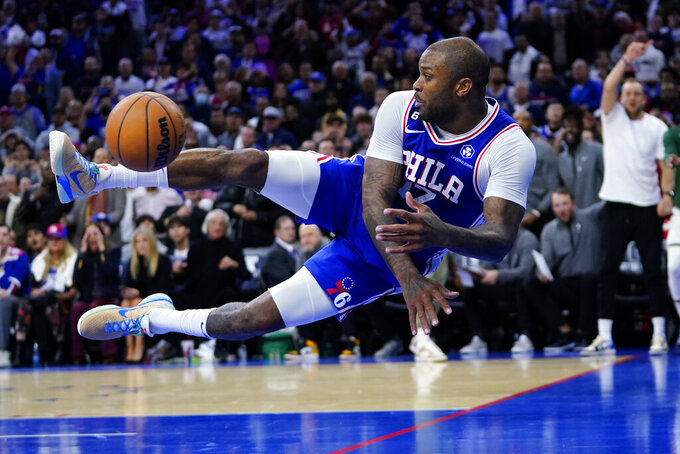 Philadelphia 76ers' P.J. Tucker saves a ball from going out of bounds during the second half of an NBA basketball game against the Milwaukee Bucks, Thursday, Oct. 20, 2022, in Philadelphia. (AP Photo/Matt Slocum)

PHILADELPHIA (AP) — The NBA stripped the Philadelphia 76ers of second-round draft picks in 2023 and 2024 on Monday after an investigation into tampering during offseason free-agency moves.

The league said the Sixers engaged in discussions involving free agents P.J. Tucker and Danuel House Jr. before the date when talks could begin. Teams were not allowed to have conversations with agents or players on free-agent contracts before 6 p.m. on June 30.

Tucker signed a $30 million, three-year contract and House signed for $8.4 million over two years. The Sixers were able to sign Tucker to the full mid-level exception and House to the bi-annual exception because star guard James Harden declined his $47.4 million option and agreed to be paid about $14.5 million less this coming season to give the 76ers flexibility in signing players.

If Harden had opted in before his June 30 deadline, Philadelphia would have had a much more difficult time finding the money to lure free agents.

“The Philadelphia 76ers fully cooperated with the NBA's investigation and acknowledge the league's ruling,” the team said in a statement. “We're moving forward, focused on the season ahead.”

The Sixers are hoping to make a run at the NBA title with a roster led by Joel Embiid and Harden. Tucker was brought in to be the defensive difference-maker the team lacked last season.

The NBA approved stiffer penalties for tampering in 2019 and stripped a draft pick from both the Chicago Bulls for early contact with Lonzo Ball and the Miami Heat for doing the same with Kyle Lowry in the summer of 2021.