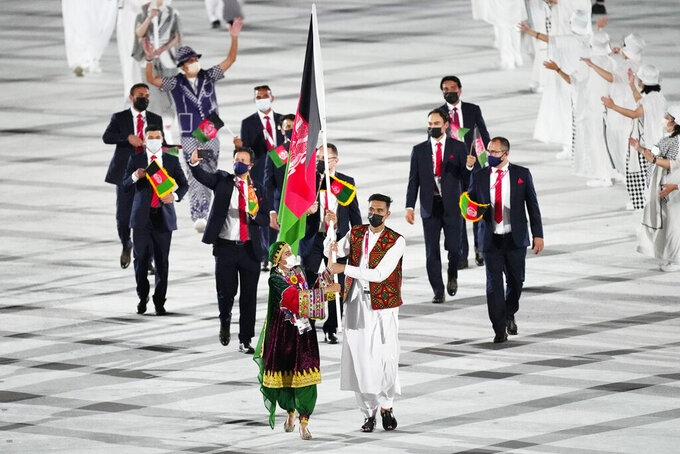 FILE - Kimia Yousofi, front left, and Farzad Mansouri, of Afghanistan, carry their country's flag during the opening ceremony in the Olympic Stadium at the 2020 Summer Olympics on July 23, 2021, in Tokyo, Japan. Afghanistan's flag bearer at the Tokyo 2020 Games and other prominent women's sports campaigners have been safely relocated to Australia following a year-long Australian Olympic Committee (AOC) project. (AP Photo/David J. Phillip, File)

SYDNEY (AP) — Olympic sprinter Kimia Yousofi has arrived in Australia to start afresh just over a year after carrying the Afghan flag into the opening ceremony of the Tokyo Games, competing in the 100-meters, and then having to watch from afar as the Taliban regained control of her country.

The Australian Olympic Committee on Wednesday said Yousofi and Asian Games taekwondo medalist Ahmad Abasy, an activist for women’s sports inclusion, were among the members of five Afghan families with ties to the Olympic movement to have recently arrived in Australia.

“It’s been a journey for me but I am very happy to be here,” Yousofi said in a statement. “I am essentially starting a new life here.”

Yousofi, who arrived with her mother and one of her three brothers, is aiming to compete in the 2024 Olympics in Paris, whether it be for Afghanistan or for the International Olympic Committee’s Refugee Team.

Yousofi was living in Iran when she gained selection for the Afghan team to compete at the 2016 Olympics in Rio de Janeiro, where she carried the flag in the opening ceremony. She had the same honor in Tokyo last year and is hoping, despite another relocation, to get another chance.

“I am going to be training very hard and it would be exciting to go to Paris,” she said. “I am definitely going to be competing.”

She also thanked the people who helped her family resettle and said she's still seeking visas for two of her brothers.

The group with Olympic links joins more than 100 other Afghan athletes, including women's soccer players and cricketers, who resettled in Australia last year after the Taliban took control amid the U.S. military’s withdrawal from Kabul after 20 years of war.

The Taliban on Monday marked a year since they seized the Afghan capital. The former insurgents struggle to govern and remain internationally isolated, while the economic downturn has driven millions more Afghans into poverty.

The Taliban-led government also has imposed restrictions on access to education and jobs for girls and women, despite initial promises to the contrary. Teenage girls are barred from school and women are required to cover themselves head-to-toe in public, with only the eyes showing.

Abasy, who has competed internationally and coached in Taekwondo, said the girls and women of his country were being “denied the right to sports.”

“This is a great loss for the sport of Afghanistan and the world," Abasy said. "Afghan girls have good talent in sports and have made significant achievements that should not be ignored.

"Afghan girls should actively participate in international competitions, and we will witness one of the Afghan girls winning a ... medal. I will fight for their rights."

Australia's Olympic committee worked with the Department of Home Affairs to secure visas and flights for the Afghan families and with sponsors for their financial support and help with accommodation and employment.

“For the families involved, the stress and uncertainty over this time has been enormous,” AOC chief executive Matt Carroll said in the statement. “These brave people have endured significant hardship. ”It’s a proud moment for the Olympic movement in Australia that we have them here, safe and settling well.”